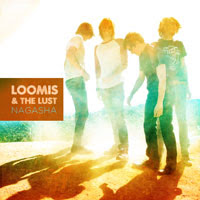 Loomis & The Lust - Nagasha EP
2009, Kings Of Spain/BMI
Santa Barbara, California is home base for Loomis & The Lust, but after listening to their debut EP, Nagasha (July, 2009) I suspect they'll be spending a lot less time at home. With such diverse influences as The Kinks, The Animals, Chet Atkins, David Bowie, Red Hot Chili Peppers and Franz Ferdinand, Loomis & The Lust create an original brand of Rock N Roll with an honest affection for 1970's classic rock and a hook-laden philosophy straight out of the 1980's. Nagasha was produced by Brandon Mason (David Bowie, Secret Machines, Bono, The Edge), and features some of the catchiest, most danceable Rock N Roll of the year.

Nagasha opens with Bright Red Chords, a song that will lodge itself in your brain before you even know it's happened. The melody here has a universal feel, like something you've heard so many times you know it even as you hear it the first time. With a catchy, dance-inducing arrangement, Bright Red Chords will stick with you for a good long time. Break On Love has a classic, Blues/Rock feel and would fit right into an AOR playlist. Sweetness sounds like it could be a mix of The Wallflowers and Dave Matthews (solo), carrying a chorus that's unforgettable, while Cure For Sale slows things down a bit in a gentle rocker that entrenches in the Wallflowers sound. Cure For Sale may well be the most marketable song on the disc, likely having significant allure for the licensing world. Girl Next Door is a big, raucous blues-influenced rocker that sounds like it could be the basis for a movie. The theme here is a classic for Rock N Roll, and Loomis & The Lust show what they're really made of, using double entendre and testosterone-laden intentions for an amusing bit of musical confusion.

Loomis & The Lust take Rock N Roll back where it belongs in the five songs presented on Nagasha, blending deep classic rock roots with some of the zeitgeist of the 1980's and a modern twist. I suspect Loomis & The Lust will see a lot of commercial success in the licensing realm, although I am not sure where they fit in currently in the world of radio. From anything I have read about the band the live show is the thing. Loomis & The Lust seems to convert new fans every time they step on stage. Consequently, while I highly recommend you check out Nagasha, I would urge you to make a point of seeing Loomis & The Lust if they come to your town.

You can learn more about Loomis & The Lust at www.myspace.com/loomisandthelust or http://www.loomisandthelust.com/. You can purchase the Nagasha EP directly from their band via their web store, or digitally via iTunes.
Posted by Wildy at 5:20 AM