Review: Katie Garibaldi - Next Ride Out 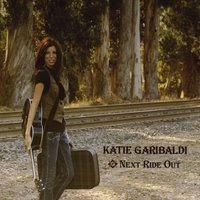 San Francisco's Katie Garibaldi released her sixth album, Next Ride Out, in June of 2009, a stunning feat considering Garibaldi is all of twenty-five years old. Garibaldi is a prodigious songwriter and engaging performer and finds time in-between to run her own record label, Living Dream Music. Produced by Guitar Player Magazine Editor-In-Chief Michael Molenda, and displays Garibaldi's eclectic mix of Rock, Country and Folk that's as Americana as they come, while also showing a more personal and more mature side of Garibaldi than we've seen in the past.

Following in the footsteps of artists like Ani DiFranco, Garibaldi controls all of her material and her own musical destiny. That comfort and self-assuredness comes through on Next Ride Out. Garibaldi opens with Say The Word, a song of love and devotion that's sweet and sultry and innocent all at once. It's major mix-tape material and seems like a perfect candidate for country and pop radio in spite of the girl-next-door aura the song carries. Hey, Hey Darlin' is a fun little country tune about love and the truly important things in a relationship from the perspective of someone who's nearly lost what they had in that department. Garibaldi breaks out the funk on A Love Without Chains, a dark and slinky tune with a seriously soulful vocal line. Without Trying So Hard looks back at a failed relationship that's deeply bittersweet. Garibaldi is at her most vulnerable here as a performer, delivering a musical soliloquy that could have walked right out of musical with deep emotion and a grace that is compelling.

You've Already Got Me gets back to the Americana sound with a sweet song of assurance that just asks for the time to allow emotions and bonds to grow in their own order. It's an incredibly mature and intelligent bit of writing that runs entirely counter to the sort of glitz-and-ditz that passes for love songs on commercial country radio. Nothing Good Lasts digs into a healthy slice of cynicism about a beau in a classic Country/Rock arrangement. This is probably the most "commercial" track on the disc. I Owe You Nothing is a down-tempo country anthem for those whose hearts have been toyed with, featuring strong songwriting and a melody that will sit in the back of your mind and remind you repeatedly that it's there. Next Ride Out closes out with Falling For You, the sort of ballad that Nashville producers drool over. Garibaldi outdoes herself with a performance that should seriously raise her profile in the country music world.

Katie Garibaldi just keeps getting better with time; the girl next door with a magical talent and an affable delivery will turn a lot of heads with Next Ride Out. Her song Falling For You is going to be a serious hit for someone, whether it's Garibaldi or someone else covering it down the road is the only question. Talent like this needs to be heard outside of the Northwest US and Texas. If you're a fan of Country or Americana music, Katie Garibaldi is a must-hear artist.

You can learn more about Katie Garibaldi at http://www.katiegaribaldi.com/ or http://www.livingdreammusic.com/. You can purchase Next Ride Out on CD or as a download at www.cdbaby.com/cd/garibaldi4.

well I'm a sucker for finding out what I'm missing... off to iTunes...

I just wanted to say that I did purchase Katie Garibaldi's Album and it is awesome. But I was fortunate to enough to catch her live show in S.F. and wow... what electricity! She has the ability to put the audience in a pleasant trance and begging for more! The album is great but if you can catch one of her performances sometime, you're in for one big surprise from this talented singer/songwriter. It's a downer when the show is over!!