Review: Dean Phelps - Give Us A Song 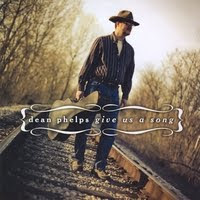 Greenwood, Indiana's Dean Phelps is a singer, songwriter and ordained minster in the Disciples Of Christ Christian Church. He plays songs both religious and secular without sounding preachy; opting instead to provide a form of family entertainment that is rare in the era we live in. Phelps provides the sort of performance you might expect to hear on The Prairie Home Companion; reinterpreting both pop music covers, gospel tunes and occasionally offering up and original tune or two. Phelps' latest effort, Give Us A Song was released in 2008 and was inspired by a long-lost friend who produced a cassette Phelps had recorded while in college.

Phelps opens up with Paul Simon's 59th Street Bridge Song (Feelin' Groovy), offering a rendition that is faithful to the light-hearted nature of the original. Up next is Fats Waller's Ain't Misbehavin', done in a folk/jazz style that's reminiscent of 1930's and 1940's vocalist but sung without the megaphone. The vocal harmonies here are exquisite. Phelps is another adherent to the school of fingerstyle guitar, and displays his talents wonderfully on his own arrangement of Precious Memories. This song has a 1970's southern gospel feel that is mellow-yet-infectious. Phelps' original tune, If You Come Up Empty is a wonderful bit of songwriting; given Phelps' profession it may well be a song from God to his children or a song from a parent to child. Either way it is as fine a piece of songwriting as you're likely to hear.

My Dog Jesus is a song with serious religious overtones presented in a bittersweet story song that will definitely get your attention. The use of allegory here is cute; and if the title offends you then you really need to listen to the song. Phelps covers Jonathan Edwards' Give Us A Song is a distinctly country arrangement that frames the melody line perfectly. Kate Wolf's Across The Great Divide is one of the highlights of the disc, with Phelps owning the song as it the words, thoughts and feeling behind the song were his own. Give Us A Song closes out with a gorgeous arrangement of Simple Gifts (sometimes called The Shaker Hymn). The guitar work here lays a stirring foundation for some experimental voice work that could sound like a chorus of angels vaguely heard at the periphery of the arrangement.

Dean Phelps walks the road of faith, and that faith informs his music and shines through it, but you'll never feel like he's preaching or trying to convince you to think a certain way. Phelps is an artist who simply is himself, and that sense of self shines through in his music. Phelps brings a voice that is pleasant and warm without ever sounding overpowering and his ability as a guitarist and writer/arranger is profound. Give Us A Song is an exciting effort that deserves a great deal of attention. Check it out!

You can learn more about Dean Phelps at http://www.deanphelpsmusic.com/ or http://www.goingoverhome.com/. You can purchase Give Us A Song as either a CD or download at CDBaby.com.