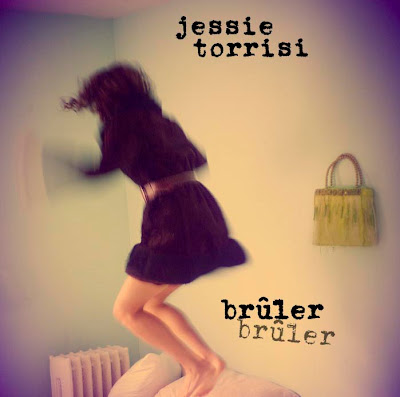 Jessie Torrisi is a drummer/journalist turned Singer/Songwriter who moved from New York City to Austin, Texas for a different perspective on the world. Torrisi served as a drummer for several NYC bands; including Les Fleurs Tragiques, Laptop and Unisex Salon before making the switch to front woman (she’s vowed to never go back). Torrisi’s debut solo album, Brûler Brûler, drops October 28, 2009, and is a musical breath of fresh air that never forgets its musical past but looks stridently forward.

Brûler Brûler opens with Hungry Like Me, a musical wish list of the qualities of a perfect man in Torrisi's terms. The easy Americana arrangement is the perfect setting for a song full of longing and desire. As you get further into the song you realize Torrisi's not just casting a wish list but speaking to someone she hopes fits the bill. There's an ambivalence between hope and melancholy here, like a world-weary woman who hopes he's the right one but who's been burned a few too many times to believe it. X In Texas, on the other hand, is a breakup song of epic proportions. Mature and quiet in its tenor, Torrisi tells him why it's over, sounding like she has cause to be angry, but forgives him and wishes him well. She just asks to be left alone, even though it's clear she still cares. Cannonball is pure desire in song; it's the queen of come-on songs, like a cross between Patsy Cline, Chrissie Hynde and Martina Sorbara.

Breeze In Carolina is an amazing tune. Torrisi is singing to someone who's trying to run away, telling him that no matter how far he runs he's going to miss her. This is one of those rare songs that come along with the potential to be a classic. I could hear this being the melancholy keynote tune for a character in a musical or a movie. It's not your typical Country/Americana tune. The song is substantial in both content and emotion. Runaway Train is another song of longing, this time in an unrequited or inattentive love. Torrisi's vocals are on fire here, full of heart and a sultry country sound that's unlike anyone on Country or Pop radio.

Storm Clouds takes on a pop sway that's highly appealing. The melody here is highly memorable, and Torrisi gives a vocal performance not to be forgotten. It's yet another song of loss, but this time Torrisi decides she's had enough. There's a hopeful ending this time, with Torrisi looking to the skies and what is coming rather than behind. So Many Miles takes on an almost 1980's AM Radio R&B sound mixing with the Americana feel. I didn't enjoy this tune quite as much as the rest of the album, but it's still decent. Brûler Brûler closes out with The Brighter Side, a piano-based tune about the hope and outlook love can bring. It's a gorgeous tune, highly personal in presentation and heartfelt in delivery. It's the perfect ending to the album.

Jessie Torrisi is a bit out of the ordinary. She's a Country/Americana singer with an Alt-Rock sound mixed in with her Country Twang. Her lyrics are intelligent and nuanced; full of sensuality and a personal voraciousness for life that can be startling and then endearing. Torrisi's voice isn't what you'd call classically pretty, but you know you'll stay and listen as long as she keeps singing. The songs themselves are off the beaten track, full of a beauty and singular personality that could become a trademark. Brûler Brûler is a thrilling introduction for us here at Wildy's World, and we are excited to see what Torrisi does next.

You can learn more about Jessie Torrisi at http://www.jessietorrisi.com/ or www.myspace.com/jessietorrisi. Brûler Brûler drops on October 28, 2009, but you can get is now as a download from Amazon MP3.
Posted by Wildy at 5:20 AM

My fav new record! Finally, a bunch of "love" songs that are as much about desire as loss.

Been listening to *breeze in carolina* on my iPod every morning on my way to work.

Can't wait to catch the show live. Anyone know when Jessie's headed back to NYC?