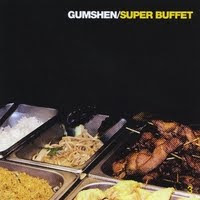 Gumshen is a Seattle quartet with serious rock credentials who choose to delve just a bit deeper. Working in elements of Jazz, Funk and Hip-Hop, Gumshen has hit a creative goldmine, generating three EPs in two short years. Their latest, Super Buffet, finds Gumshen on a path of distinctive musical creativity tempered only by a paucity of lyrical depth.

Super Buffet opens with Start Of Something Good, an alt-Rock tune that apparently brought about some creative issues in the lyric-writing process. The highly repetitive nature of the song detracts from a not unpleasant rock arrangement that sounds like it may have been recorded in one take. Lost Disguise reveals an outright ambivalence toward lyrical progression even while building a decent melodic and harmonic progression into the song. The lyric issue is befuddling, as Gumshen almost appears to place statements together without regard for their connectivity. That's not suggest that the lyrics are random, but there is seemingly a shattered sense of thought behind the first two songs. Gumshen opens up the throttle on Guts, building around a vicious guitar riff another song that is sonically pleasing and lyrically puzzling. Gumshen steps out of the lyrical woods on Gone Too Soon, speaking in terms that make sense in a highly enjoyable Elton John-ish arrangement. There's still a tendency to go off the tracks here and there as Gumshen appears to make lyrical choices at times based on rhyme and rhythm rather than narrative, but on the whole it is much easier to follow Gone Too Soon than the prior songs on the EP. Super Buffet closes out with Down Like Me, spearheaded by another vicious guitar riff you won't be able to get out of your head. Once again, repetition, rhythm and rhyme seem to take precedence over conveying understandable thought, but the music is very enjoyable.

Gumshen's Super Buffet is a tasty treat, musically, that often times just doesn't live up on the lyric side. As a listener you get the feel that the words are second class citizens, chosen more for their sound than for their meaning. Gumshen proves this isn't always true on Gone Too Soon, a moving and powerful tune with an eye for a bleak future hoping to motivate the present, but otherwise you might expect to get a bit lost for meaning amongst the rhythm and rhymes of Ron Hippe's vocals. Super Buffet is nevertheless musically intriguing and worth checking out.

You can learn more about Gumshen at http://www.gumshen.com/ or www.myspace.com/gumshen. You can purchase Super Buffet as either a CD or a download from CDBaby.com.
Posted by Wildy at 5:10 AM