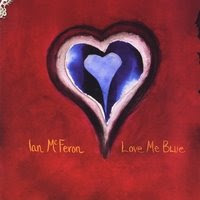 Ian McFeron is has been a prolific contributor to Seattle's singer/songwriter scene since 2003, when he released his debut album, Don't Look Back. Long received regular airplay on KMTT "The Mountain", McFeron has built a steady following in the Pacific Northwest playing Americana and Roots music with a modern edge. Joined by fiddle player Alisa Milner, bassist Norman Baker and drummer Mark Bateman, McFeron provides danceable music with a mature sheen that is rare in such a young performer. McFeron's latest venture, Love Me Blue, was release in early 2009 and features some of his most interesting work to date.

Ian McFeron Band opens with Love Me Blue, a low key Folk/Americana tune. McFeron's enigmatic voice contains distinctive shades of Bob Dylan. More Than Love is pleasant/upbeat Americana Rock. There's a slightly soulful/country feel going on here that gives the song strong commercial appeal even as an acoustic track. I particularly enjoyed the instrumental work on Anna Behind The Veil. The Monkey With The Fancy Clothes was somewhat odd but amusing all at once. Another Way To Bleed is a poetic and mild, almost to a fault on the latter. There just isn't a lot of energy in the song, to speak of. Other highlights include Love And Faith and Good Morning (I'm Still Here).

Love Me Blue is an uneven yet often pleasant listening experience. I find it hard to go beyond pleasant for much of the disc; McFeron just doesn't project a great deal of energy into his songs. It makes me think that McFeron writes everything as a solo artist and then takes it to band to have it reproduced rather than working in tandem. The act of writing with others might bring out more energy, spark or on-going conflict in the songs.
Rating: 2.5 Stars (Out of 5)

You can learn more about Ian McFeron Band at http://www.ianmcferron.com/ or www.myspace.com/ianmcferonband. You can purchase Love Me Blue as a CD or a download at www.cdbaby.com/cd/ianmcferon5.
Posted by Wildy at 6:14 AM