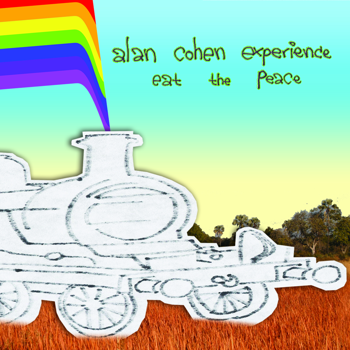 Alan Cohen is back with his Orchestra of Personality with a six-song EP, Eat The Peace, due out on November 3, 2009. Cohen is something of a visionary, using an ever evolving ensemble to create and recreate music in new and fascinating ways. Eat The Peace is the follow-up to 2008's Alan Cohen Experience EP; both of which are produced by Brooklyn's own Roger Greenwalt (The Pierces, Ben Kweller, Nils Lofgren). The EP is a continuing document of Cohen's prodigious songwriting and arrangement skills, and serves as an appetizer to Cohen's next full-length project, a concept album based on Stephen Hawking's A Brief History Of Time.

Eat The Peace opens with Rock Biter, a wonderfully quirky bit of Euro-Pop with Blues in its lineage. It’s a wonderfully tuneful song that isn’t an ode to the character from Never Ending Story, but some equally fanciful character from Cohen’s mind. If Rock Biter is odd or unusual, then Train God descends into utter madness in a once again strong melodic tune that makes about as much sense as a They Might Be Giants Dial-A-Song snippet. Alan Cohen Experience gets into a Van Morrison-meets-The Beautiful South vibe on Ranger Stranger, a highly catchy ditty about a train robber who is something of an urban legend (in Cohen’s song, at least). It’s a very enjoyable tune that will get stuck in your noggin. Jester sticks to the quasi-Lo-Fi aesthetic that pervades Eat The Peace; the comparisons to early They Might Be Giants are apropos, no where more so than on Jester where Cohen sounds like a slightly less nasal John Linnell. Peace is cute but nondescript. Eat The Peace closes out with Truck Driver, the ode to this profession that the world has been waiting for. It’s a quirky tune that straddles the line between novelty tune and children’s song while actually taking a poignant look at what might make a truck driver tick.

Eat The Piece is a pleasurable, if odd, musical ride. Alan Cohen is a good enough writer to make outright novelty pieces seem like quirky but serious compositions. I think Alan Cohen Experience is probably a bit of an acquired taste, but easily so. The infectious melodies; minimalist arrangements and off-the-wall subjects will intrigue and fascinate listeners.

You can learn more about Alan Cohen Experience at http://www.alancohenexperience.com/. Eat The Peace will be released November 3, 2009. Expect the album to be available at Cohen’s website and various other online outlets.

Devo, They Might Be Giants, John Linnell, Ben Kweller, The Pierces, Nils Lofgren, Stephen Hawking
Posted by Wildy at 5:00 AM