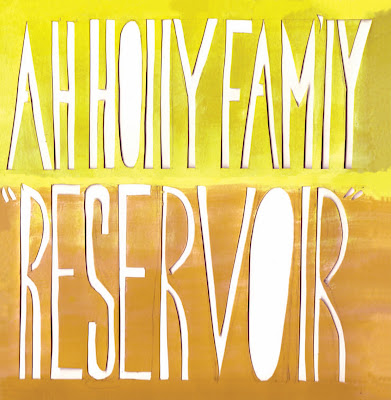 As societies age and people become more and more removed from the yesterdays they long for there is always a long to return to our roots. This explains the rise of Americana and more recently, the neo-Folk movement that returns to Appalachian Folk and Celtic styles that informed the early development of much of American Popular music. In the rural land of Idaho a spark was born; a marital and musical collaboration between Becky Dawson and Jeremy Faulkner gave birth to Ah Holly Fam'ly (which is based out of Portland, Oregon these days). Fitting in somewhere between The Be Good Tanyas and Mammoth Life, Ah Holly Fam'ly juxtaposes familiarity and comfort with alienation on their debut CD, Reservoir, due October 13, 2009.

Reservoir opens with Young Veins, a song longing for the days of youth. There is a jaunty spirit of reverie to the song that is undercut with regret. This is a very well-written and fitting opening track. Year Of The Viking has a lush feel with intricate instrumentation and a surreal atmosphere. It's the sort of musical wash that you might hear in a gothic horror tale. Rainstick reminds me heavily of Kevin Hearn's (Barenaked Ladies) first solo album Mothball Mint. It's ethereal pop that more or less meanders along like a stream without a strong feel for beginning, middle or end; as if you are simply hearing part of the stream as a representative of the whole.

Stranger Maker is a determinedly lethargic waltz about inevitability. The arrangement is slightly disturbing and doesn't settle for the usual logical ending; stopping abruptly when it’s said what there is to say. Ah Holly Fam'ly moves from this stark presentation to the lyric and melodious Lucky Peak. Once again seriously reminiscent of Kevin Hearn, Ah Holly Fam'ly spends nearly five minutes rambling and meandering without ever seeming to seriously crest or trough in their intentions or energies. Salt Of The Century pulls in some vaguely Klezmer instrumentation on the introduction and resolves into a mellow waltz where the energy and action are in the harmony vocals. The song itself drones somewhat, with lead vocalist Jeremy Faulkner offering his typical low key vocal. The album closes out with Gliders, a brief but lovely madrigal that serves as an epilogue to a journey that has been confusing but not without lovely soundscapes.

Ah Holly Fam'ly isn't a comfortable listen. There's a bleak feel that runs through much of the music on Reservoir, where even the happier, more harmonious arrangements carry a deep-seated sonic discomfort. This artful representation of an artist-as-representative-of-society not at comfort with him/herself is academically brilliant even if it does cause a fair amount of sonic and cognitive dissonance along the way. Reservoir is a challenge that I think is mostly successful. A better job could have been made of the mixing of the album; Faulkner's vocals are so fragile that they at times become lost in even moderately loud acoustic flourishes, but the vocal harmonies and musicianship build around his voice to create a unique sound and musical approach. Spend some real time with Reservoir. You may flat out dislike it the first time you listen to it; I did. But it will grow on you.

You can learn more about Ah Holly Fam’ly at http://www.ahholly.com/ or www.myspace.com/ahhollyfamly. Reservoir drops on October 13, 2009. Keep checking the band’s website for updated release information.
Posted by Wildy at 6:26 AM