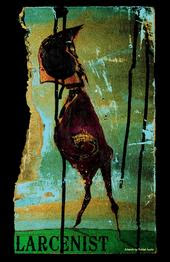 Larcenist is more like a collective than a band. All five members sing and four contribute in the songwriting process. Starting out as Boston Vessels, Larcenist was born after a house concert in 2008 when they found guitarist Jeff Rowe (Tomorrow The Gallows, Boxingwater). Brandon Mastrangelo (guitar), Jonathan Tompkins (drums), Steve Terry (bass) and Jonathan Schoeck (keyboards) round out a band that’s difficult to classify and impossible to nail down. In June of this year, Larcenist released their debut CD, also called Larcenist. It’s esoteric, unusual, out of the box and shows flashes of brilliance.

Larcenist opens with Home, a jangly rocker about a desire to give in to the gravity of the place you start out. It could be the message from a small town to a child with stars in their eyes. Artisans & Larcenists is a musical picture of blighted industrial towns where the blue collar workers have been victimized by the loss of factories/jobs; the rich have moved out into the country and the only folks left in town centers are the artists and those who prey upon society. The imagery and lyrical take are dead on even if somewhat simplified in song. It's a great bit of social commentary in the form of a rather nifty song. Excuse continues in the social vein looking at the genesis of street crime. The picture painted here isn't pretty and may well offend some while sparking thought and even conversation in others. In other words, it's dead on.

Timing Is Everything puts someone on a pedestal in very self-effacing terms. It's not my favorite song on the disc but it's an interesting statement based in self-doubt and even perhaps a bit of self-pity. Tragabigzanda takes its name from the coastline near Rockport, Massachusetts, so named by Captain John Smith in 1614 after a Greek Maiden who had been kind to him in captivity. The song reflects the freedom that might have been felt by Smith and his fellow explores upon seeing the headland for the first time. Editor's Notes is a jaunty bit of self-doubt set to music. This is probably one of the most fun tracks on the disc in spite of the content. Larcenist closes out with Alarms & Weekends, a bit of mellow Americana that's the perfect aperitif to the album.

Larcenist has a distinctive Lo-Fi quality to their songs and songwriting that is endearing. The rough edges are here on display and make the songs more interesting. The intelligent social commentary and abjectly disdainful self-image reflected in the songs bring to mind a life-long city dweller with an ultra-realist bent. Larcenist is a fine album that challenges the mind while providing arrangements are pleasant to hear.

You can learn more about Larcenist at www.myspace.com/larcenistmusic or http://www.bostonvessels.com/. As of review publication I was unable to find an online outlet for the Larcenist album.
Posted by Wildy at 5:05 AM