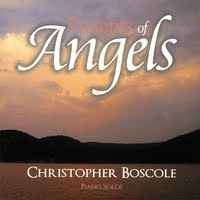 Hawaii's Christopher Boscole is a composer, arranger and pianist who has six albums under his belt encompassing a twenty year career spanning New Age, Classical and Jazz. Boscole was recently nominated for Solo Piano Album of the Year at Whisperings Radio for his latest effort, Presents Of Angels. We had an opportunity to check out Presents Of Angels recently. Let's take a look!

Presents Of Angels opens with Once In Time, a searching piano peace with a gorgeous primary theme and wonderful texture in the left hand. As a solo piano piece it goes beyond the usual easy listening piano material we hear, showing real structure and at least a hint of narrative nature. Country Hymn has hints of a cinematic nature to it, sounding like the opening them music to a movie filmed in a pastoral setting, or transitional music that follows over-time actions that help to move plot. There is a real sense of movement here and a pleasant melody to ride along. Hoedown Jig doesn't really end up sounding much like its title, but has a lively feel to it that will have you moving in your seat. There's a distinctly popular feel to this song, like there might be lyrics and instrumentation out there somewhere that would turn this into a Pop/Rock song.

Angel Of Bliss once again finds Boscole treading into cinematic grandeur. If you listen closely you can almost hear the orchestral arrangement take shape around the piano. Boscole displays a real sense of presence at the piano, and an ability to move the listener along with him. Presents Of Angels has an uplifting nature while maintaining a highly composed "voice", speaking of joy from a place of peace. The Heart Is The Home has an airy feel, like a pop ballad without words. You could hear someone like Celine Dion making serious hay with this melody. Boscole wraps up with Once Another Time, a meandering and pensive tune that revisits the same textured and rhythmic form of Once In Time on the left hand while expanding on an almost ethereal theme with the right.

Presents Of Angels is a bit more than your usual instrumental piano recording, particularly when Christopher Boscole finds an inspired theme. There are a few creatively mellow songs on Presents Of Angels, but most of the time Boscole is right on top of his game, pushing and pulling and striving to find the smallest moments within each composition and make them shine. More often than not he succeeds brilliantly.

You can learn more about Christopher Boscole at his web page or on Facebook. You can purchase Presents Of Angels as either a CD or download through CDBaby.com.
Posted by Wildy at 5:00 AM