Review: Marc Gunn - What Color Is Your Dragon? 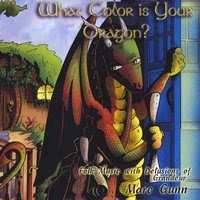 Marc Gunn – What Color Is Your Dragon?
2008, Mage Records

Marc Gunn is known the world over for being one of the biggest promoters of Celtic music in the business. His “Irish and Celtic Music Podcast” (3,000,000 downloads on iTunes) and “Renaissance Festival Podcast” are popular downloads on the World Wide Web. He is also known as the lead vocalist of the Brobdingnagian Bards, who have frequented Renaissance Festivals and Fairs for a number of years now. He is a regular performer at Dragon*Con, the largest Sci-Fi and Fantasy fiction convention in the world. He was even tapped to headline a Lord Of The Rings Oscar night party. Late of Austin, Texas, recently relocated to New Orleans to be part of the city’s musical renaissance. Gunn sent us a copy of What Color Is Your Dragon?, his 2007 release to check out. So what are we waiting for?

Gunn has certain themes that recur throughout his music that shouldn’t be a surprise to anyone. Much like the guys from Big Bang Theory, Gunn is fascinated with The Lord Of The Rings, Star Wars, Harry Potter, dragons and innuendo. All of these subjects are delivered in the classic style of an Irish or English bard, the sort who would travel from town to town in Medieval times to bring news, stories and songs to the working and farming classes in exchange for food, drink, lodging and perhaps a few coins. Gunn kicks things off with the humorous Don’t Go Drinking With Hobbits; implying that the pint sized anti-heroes of J.R.R. Tolkien’s classic series might just drink you under the table. A Rabbit For Halloween is an interesting tale in music about rabbits, witches and brooms. It’s highly entertaining and a perfect example of the Bardic style Gunn lives by.

Samwise Gangee is another trip to Tolkien’s Hobbiton. It’s very well done but likely to appeal only to hard core Tolkien fans. The Virgin Diet (How To Have Fun Losing Weight) is absolutely hilarious, although perhaps not entirely PC. Dub this style Geek-Folk if you want, but this is the sort of song that used to earn Bards their bread and butter. How Do You Tell A Woman You’re In Love is an interesting turn, with Gunn sounding vaguely like Gordon Lightfoot. It’s a solid tune that sounds like it could have its genesis in a Renaissance Fair musical production.

From the drinking game category Gunn comes up with the Pleasant Pheasant Plucking Song. This tricky bit of musical alliteration is ripe for slips of the tongue that would send the censors into fits of apoplexy. It’s a party song that gets more and more debilitating the more you miss, but the highlight of the record is Lusty Young Sith. In classic bard style, Gunn tells the story of a light saber battle that’s full of sexual tension and innuendo. Each stroke and thrust of the ensuing battle is lovingly detailed here. If I Were A Horse takes on another function, winning the award for the most creative use of the word snot in a song. It’s an entertaining ditty, particularly after a flagon or three.

My other favorite from the CD is The Last Chicken Of Dublin, which details the dangers of running a-fowl of authority. This song is entertaining and bold without going over the top. Gunn visits Tolkien’s world twice more: The Nazgul Song and Gollum Blues. Both are fun to listen to but are likely to be a bit much for non-fans of The Lord Of The Rings. Gunn takes one amusing and off-beat crack at opening up the Harry Potter narrative with a song in the voice of the son of Professor Lupin and Tonks: My Father Was A Werewolf. This one will appeal to fans of J.K. Rowling’s classic series as it is faithful to the spirit of Harry Potter without being stale. Other highlights include Monkeys Over Mongolia, Pig’s Song and I’ve Saved The Earth.
Marc Gunn pulls this music off as more than just a novelty act because he sells every note of every song. There is a fair bit of novelty value here, but Gunn is a serious musician who chooses to have fun with his material. What Color Is Your Dragon? Is a lo-fi classic, getting at the Celtic roots of folk music like few others in the genre. This CD will appeal heavily to Sci-Fi and Fantasy Fans, SCAdians and other Renaissance Fair folken. Beyond that, anyone who likes singer-songwriter styles may recognize this is it in its rawest, most basic form. Even if you’re skeptical of the subject matter, sit back, relax (as you might) and give it a fair listen. Marc Gunn will charm you, make you laugh and perhaps even make you think. Somewhere along the way magic happens. What Color Is Your Dragon? Is a classic; a Wildy’s World Certified Desert Island Disc. Don’t pass it by.

You can learn more about Marc Gunn at http://www.marcgunn.com/. You can purchase a copy of What Color Is Your Dragon? at www.cdbaby.com/cd/gunnmarc5.
Posted by Wildy at 5:20 AM

I love this album. 8) Its decidedly well done and extremely cerebral if you let it be. 8) And if you just want to listen w/o picking it apart, its still a great hoot. Something for everyone.