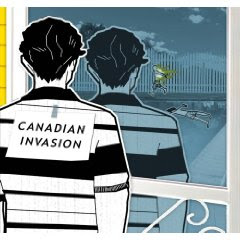 Philadelphia’s Canadian Invasion comes calling with their latest release, Three Cheers For The Invisible Hand. Smartly sardonic lyrics mix with mellow-rock arrangements to create a subdued listening environment. Lead vocalist Andy Canadian and gang have traveled the East Coast of the US for the past couple of years, sharing the stage with the likes of David Bowie, The Rolling Stones and Lou Reed. Their songs strive to reflect the lifelessness of suburban living, where the soul has been ripped quietly away by separating residents from both the action of the city and the vibrancy of nature.

Anyone who publishes under the name Old Janx Spirit Music gets points for chutzpah but can they carry the name? Canadian Invasion has perhaps met their objectives too well. Lyrically strong, the music is not without energy, but reflects the hum-drum angst of suburban living all too well, forming a sort of musical monotone that stretches across the CD. The sound is pleasant and works for the individual songs here, but the lack of significant sonic variation across the CD makes for a listening experience more memorable for what it’s not than what it is. Even the occasional moment of sonic violence or turmoil would spice this up and provide some ebb and flow to the sound; they are not to be found.

Nevertheless, highlights abound. Tomorrow and Tomorrow is a great musical arrangement, though subdued. Americana/Country accents flavor this song nicely. One Hand Claps The Other is the closest thing to a real change of pace, featuring s new wave flavor and a vibrant energy level, but still produced in that very subdued, repressed sound that dominates the album. Neighbors, the final track, is the absolute class of the album. It gives hope that whatever might come next from Canadian Invasion might provide more spark.

Canadian Invasion is a very talented band, that much is clear. Three Cheers For The Invisible Hand has solid to plus songwriting and a couple of truly inspired moments, but falls victim to a uniformity of sound that makes it seem less than it is. It seems as if Canadian Invasion was going for a specific sound, with continuity, for the album. If so, they outdid themselves. It’s a pleasant listen, but it will be too easy to tune out because of that consistency.

You can learn more about Canadian Invasion at http://www.canadianinvasion.org/. You can purchase a copy of Three Cheers For The Invisible Hand at Amazon.com.
Posted by Wildy at 5:00 AM