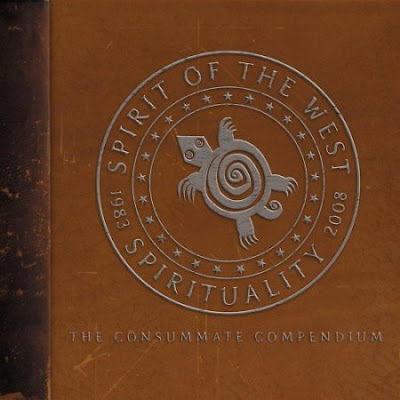 Spirit Of The West celebrated their 25th year in 2008 with the release of Spirituality: 1983-2008, a 2-CD collection of some of their best material from across the years with two new songs thrown in for good measure. Spirit Of The West has traversed Canada many times over the years, and to a lesser degree the United States and Europe. Starting out as a Celtic folk group, the sound has evolved over twenty-five years into a more refined pop/rock/Celtic blend, but Spirit Of The West never forgot their roots. Where you are a long-time fan of Spirit Of The West, a passing acquaintance, or even if you’ve never heard of them before, Spirituality offers much to enjoy and needs to be on your “get” list.

For the fans of Celtic and Scot songs, Spirit Of The West brings much from their glorious past to Spirituality. Doin’ Quite Alright, The Crawl, The Old Sod and Home For A Rest all fit the bill quite nicely. Home For A Rest has been consistently ranked by Canadian music fans as one of the top Canadian New Rock songs of all time. Of course, Spirit Of The West had a distinct social conscience in their music as well. Political, their first real hit, is an amazing song about the imbalance in a relationship caused by an insecure or controlling partner. Long time fans will be happy to know that the original version of Political (from Labour Day) is offered here. (Putting Up With) The Joneses is a tongue in cheek look at the sort of damage socioeconomic elitism can lead to; even touching on the social taboo of Eugenics.

Spirit Of The West happens to have written one of the most amazing songs I’ve ever heard, and it’s included here. Take It From The Source takes on bigotry and hatred with a velvet glove lined with iron. The pen is mightier than the sword by far in this moving and powerful personal answer to one of the darker elements of human nature. Take It From The Source, like Spirit Of The West themselves, should be a lot better known than it is.

You can hear the progression from Celtic folk group to rock band occurring throughout Disc One of Spirituality, with Save This House being the first sign that something’s afoot. By the time we get to songs like Goodbye Grace, D Is For Democracy (Scour The House) and Big Head, Spirit Of The West have achieved a true pop rock sound while still heavily influenced by their Celtic roots. Disc Two completes the transition, with five tracks from the Michael Phillip Wojewoda produced Faithlift ((And If) Venice Is Sinking; Sadness Grows; Bone Of Contention; Death On The Beach and Is This Where I Come In). Faithlift was Spirit Of The West’s best selling album with a fair amount of cross-exposure on soundtracks, TV, etc. The instrumentation and arrangements still suggest their roots, but the production values are the pure pop genius Wojewoda has long been capable of.

Unplugged continues the run of social commentary in an upbeat song about Euthanasia and the right to die. Delivered with a wry smile, Unplugged has deep philosophical roots in the right of individuals to determine their own fate. Wishing Line and Our Ambassador find Spirit Of The West at the nadir of their pop/rock sound, almost wholly distinct from where they started out. The album was Weights and Measures, and while offering up songs wholly in the rock realm, Spirit Of The West offered distinct nods to the “old” sound with Canadian Skye and Rites Of Man.

Spirituality also features two brand new tracks, the moody Winter’s Now The Enemy and the raucous Another Happy New Year. The two tracks reflect the two musical aspects of Spirit Of The West wonderfully well. You’ll find yourself wrapped up in the tension and beauty of the former and wanting to dance to latter (preferably with some Guinness or some grog).

Spirit Of The West has built a vibrant and varied catalog over the last quarter century. Too prolific and profound to ignore, the band continues to be a hit at live shows across Canada. The days of endless touring long behind them, Spirit Of The West are content continuing to make great music their way; in their own time and fashion. They still tour, and will commence a tour of Eastern Canada with Great Big Sea on March 11, 2009. While Spirit Of The West was a major label act at one time, they have always carried themselves with an Indie Spirit, and their music is a testament to that. Spirituality is a collection of some of their best moments, but there is much good material not represented. (Noticeably absent is anything from their fine album Open Heart Symphony, as well as my personal favorite song from Faithlift, Sincerely Yours), but a collection of this sort should inspire you to look (and listen) deeper; leaving some nuggets behind for the ardent listener to be rewarded with. With all that’s here, Spirituality can be nothing other than a Wildy’s World Certified Desert Island Disc. It’s an absolute must-have.
Rating: 5 Stars (Out of 5)
You can learn more about Spirit Of The West at http://www.sotw.ca/. You can purchase Spirituality at CDUniverse.com. You will find it Amazon.com but will pay $15 more. Be sure to check out Spirit Of The West’s web page and particularly the individual members’ blogs on that site. John Mann, Geoffrey Kelly, Hugh McMillan, Vince Ditrich and Tobin Frank all have long musical histories that include solo albums or albums with other bands as well numerous guest appearances over the years.
Posted by Wildy at 5:20 AM

Thanks so much for this post, really helpful material.