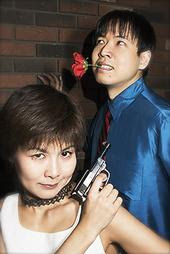 Tokyo Penguin is the pairing of Toshi Nakayama and Chinatsu Uehara, two Japanese expatriates who met at a New York City acting class. Borrowing from the worlds of J-Pop, Broadway, American pop, electronic, Motown and anything else they can lay their hands on, Tokyo Penguin create a menagerie of sounds you have to hear to believe. Debuting at CBGB’s DownStairs Lounge in 2005, Tokyo Penguin has received accolades from both Eastern and Western audiences. Tokyo Penguin submitted a demo for review.

Tokyo Penguin is one of the most eclectic groups we’ve heard here at Wildy’s World. Their demo opens with Boogeyman, which is pure club kitsch, a very danceable tune with a frenetic beat. It sounds like The B-52’s on acid in a hall of mirrors. The Fish Monger is about a possibly unhealthy fascination with a fish seller, sung by the Lollipop Guild. Wanton Girl is an interesting mix of electric and acoustic sounds that samples eastern trills amidst Drum N Bass and distorted guitar. Astounding is an alt-rock gem with electronic elements and occasionally dissonant harmonies. Mandala/Mandala is the only song here that doesn’t quite work; it becomes something of a sonic mess. Oh! Oui Oui is definite club material. I can see this doing very well in that environment as it is an obsessively mindless song about hooking up. Ying Yang is an interesting track. Chinatsu Uehara is actually quite a competent rapper, whereas Toshi Nakayama is more flamboyant and over the top ala Fred Schneider.

Tokyo Penguin’s sound will be familiar to fans of J-Pop, and draws on enough Western influences to hold interest of American audiences. The B-52’s comparison is apt although Tokyo Penguin might even be more eclectic. With the right song or moment Tokyo Penguin could be huge. More likely they will develop a very strong and loyal if not overly large following that will keep them making music as long as they want. An intriguing listen.

You can learn more about Tokyo Penguin at www.myspace.com/tobetobepenguin or iacmusic.com/tokyopenguin.
Posted by Wildy at 5:10 AM