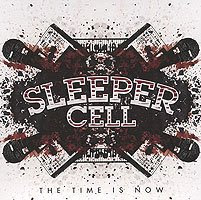 Drawing on influences ranging from Tupac Shakur to Eminem, Sleeper Cell blasts out of Indianapolis, Indiana with their debut recording, The Time Is Now. The album opens with a sample of Franklin D. Roosevelt’s “This Day Will Live In Infamy” speech on the title track. Whether or not intentional, the use of an event that signaled the coming out of the United States as a world power is a strong and pointed message in a song about Sleeper Cell’s self-introduction to the world. Sleeper Cell seems to struggle with its own best intentions throughout The Time Is Now, at times expressing deep yet subtle socio-political commentary while at other times falling prey to the stereotypical conventions of Gangsta Rap. Move Forward is a song about survival and can be heard on many levels given the current economic environment. This is one of the things that makes Sleeper Cell so unique and concurrently so frustrating. In one verse you might think they’re talking about life on the streets and in the next it may sound like they’re talking about life in the boardroom. This could be intentional, and if so it shows signs of lyric genius. The ability to essentially tell a parable that applies to both the street and the boardroom with the same moral is a rare gift. But given some of the more mundane material presented here it is hard to know whether these moments are cases of transitive genius or pure luck.

Just for the record, we’re leaning toward the transitive genius argument, but it’s still open for discussion. Best Effort addresses the corporate race to the top in street vernacular, exhorting listeners to give their all but not to forget themselves along the way. Once again the song could apply to many different settings and speaks to an ability that is uncanny. The backing vocals provided Lynda Sayyah are amazing. We don’t know much about here, but suggest that if she hasn’t already considered recording some material of her own that she do so. My Mistress takes a turn for the more mundance side as Sleeper Cell falls into a stereotype that diverges from the path they’ve chosen thus far on The Time Is Now. The trend continues through Pay For What, Husslin’ For Mine and Time Flies.

I’m Not The One stays with the stereotype somewhat but at least shows a little more depth. It also makes use of some interesting dialogue samples of Steve Carrell from The Forty Year Old Virgin. Always On The Grind returns to some of the higher minded intellect that Sleeper Cell shows early on. Blame The Game adds some funky guitar work to the mix in one of the more personal and well thought out rhymes on the disc. Respect is a song that anyone who’s ever worked for a living can identify, like an apt epilogue to the movie Office Space. Get Paper expresses the thought that rhymes are the motivation for Sleeper Cell, not money or notoriety. Based on the material here I would guess it’s at least partially true. What’s Your Profession would seem to support this idea as well. The set closes out with I Don’t Matter, a big Drum N Bass rhyme.

Sleeper Cell create some moments of genius on The Time Is Now. They also fall prey to their own baser instincts at points on the album. This is a group with real potential to lift Rap Music back up to the level of art form that it once was. Sleeper Cell believe they’ve grown as artists in the four months since the release of this album. Based on what I Hear on The Time Is Now I’m willing to take that on credit. Sleeper Cell has the ability to reach for higher concepts in street terms and speak to a slew of fans for whom they hyperbole of profanity and base concepts generally turns them away from rap. At their best Sleeper Cell are masters or rhyme and reason. It will be curious to see what comes next. For the moment, The Time Is Now is an outstanding debut.

You can learn more about Sleeper Cell at www.myspace.com/sleepercellcrew. You can purchase a copy of The Time Is Now at Underground HipHop.com.
Posted by Wildy at 5:00 AM

Nice review Wildy! I recently purchased this cd off of ebay and was searching around on the net to see what else they have released since. I really liked alot of their songs and can't wait to hear more.

Thank you for the article, really useful data.