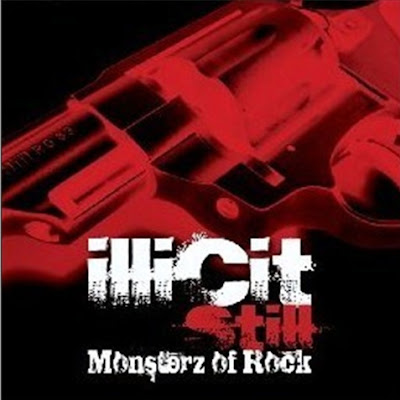 Illicit Still is a tribute band from England that pays homage to the golden age of heavy metal. Everything from AC/DC to Motorhead to Van Halen is in play, and Illicit Still plays them with gusto. Illicit Still releases Monsterz Of Rock in 2009 highlighting some of their favorite tunes from the 1970’s and 1980’s. Let’s check it out.

Illicit Still is led by Mal The Voice, who growls his way through the five songs here effectively and passably. Mal is a decent singer for the style, but is victimized somewhat by the material. There are certain songs as a singer you just don’t tackle unless you can come close to the original or unless you’ve found your own original read on the song. Illicit Still is extremely faithful to the original renditions, and Mal just doesn’t have the range to match Bon Scott or David Lee Roth at their most dynamic. Illicit Still opens with Motorhead’s Ace Of Spades. It’s a solid, straight up cover, but the mix is way off, making it sound like the band is 100 yards behind the singer. Up next is Twisted Sister’s Shoot ‘Em Down. The rendition is faithful and clean, but once again Mal The Voice just can’t pull off the electricity Dee Snider was capable of.

AC/DC’s Highway To Hell is much the same story. Thin Lizzy’s Whiskey In The Jar is more within the range of Mal The Voice, and the faithful rendition sounds like the original than any of the other tracks here. Illicit Still closes out with Van Halen’s Panama. Here the gap is widest, as while both Mal The Voice and guitarist Stevie Peps Laing are faithful and talented, neither can quite capture the Zeitgeist of the original.

Illicit Still is a great cover band. On a Friday or Saturday night, if your taste runs to metal and Illicit Still is playing the local pub then they’d make for a fine evening of entertainment. They’re good, but don’t really stand out significantly in a market glutted with cover bands. Monsterz Of Rock is a decent listen, but in general these covers just don’t stand up next to the originals.

You can learn more about Illicit Still at www.myspace.com/illicitstill. We’re not sure if Monsterz Of Rock is to be a commercial release or a demo. Keep checking back to Illicit Still’s MySpace page for further info.
Posted by Wildy at 2:08 PM