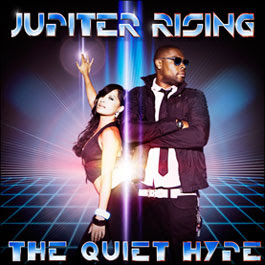 Jupiter Rising made quite a splash with their debut album, 2006’s Electropop. Music from the album is in regular rotation in television shows, commercials and sports arenas everywhere. On March 17, 2009, Jupiter Rising returns with their sophomore effort, The Quiet Hype. Vocalist/Producer Spencer Nezey and vocalist Jessie Payo grace us with an eclectic mix of electro/dance pop, soulful ballads and even the occasional stab at social commentary. A 2009 tour is in the works.

The surprising choice for lead single from The Quiet Hype is Falling Away, an up-tempo dance/pop tune that is certainly accessible and fun to listen to, but hardly the best candidate for a single here. Tres Cool, the likely second single, should have gained the first spot. The only justification for holding Tres Cool back is that it’s a perfect summer hit. Expect to hear it everywhere this summer; it’s a can’t miss single. Guarded could make for an interesting release. Although not as dynamic as Tres Cool, it has interesting vocal triad harmonies very reminiscent of Wilson Phillips.

Flip My Switch is bound for the hard core dance club scene. That it lacks in subtlety it make up for in pure glam and raw sexuality. The Quiet Hype is a personal favorite, as it lets Payo show off her vocal skills in a more relaxed setting. While still heavily produced, Payo gets to play with some seriously constructed harmonies. Payo has a perfect rock/pop voice with just enough edge to be memorable. Over Again is another mover and shaker. It’s a great pop tune, heavily produced but none the worse for wear.

L.A. Girls is a fun listen, trashing the gimme-gimme culture of Los Angeles (“Prada Bag, Gucci Shoes, Louis V, Jimmy Choos”). Other highlights are Follow Me, Snakeskin and When The Bass Drops.

Jupiter Rising isn’t exactly bubble gum pop, but they don’t hide their heritage in that realm either. Mixing elements of Pop, Hip-Hop and Rock, Jupiter Rising has created a highly entertaining dance album in The Quiet Hype that should gain significant commercial traction. And if it’s not the most intellectual music in the world, who cares? Who wants to think while they’re dancing?

You can learn more about Jupiter Rising at www.myspace.com/jupiterising or http://www.jupiterisingmusic.net/. The Quiet Hype hits shelves on March 17, 2009, and can be pre-ordered through Amazon.com. If you just can’t wait you can download Tres Cool and L.A. Girls through iTunes. And be sure to check out Jupiter Rising’s website. They’re running a remix contest for the song L.A. Girls that could get you some face time on Jupiter Rising’s web and MySpace pages.
Posted by Wildy at 5:10 AM

I was looking for information on Jupiter Rising - The Quiet Hype and before ending in your blog I watched like 10 sites about viagra online, the web is full with that topic. But anyways the info on your site help me very much, thanks for the post and have a nice day.