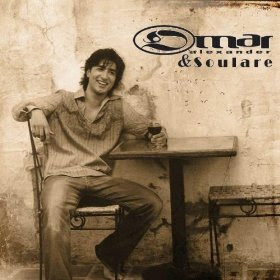 Latin music has metastasized in popular culture, no longer only a distinct genre but also an influence that creeps into Pop, Rock, Folk, Dance, Hip-Hop and other genres. Latin Rock has existed for years, but has failed thus far to overtake the popular music scene in the United States. That may be about to change. Omar Alexander, the New York City-based bilingual singer/songwriter has released Soulare, an album set to explode into the social consciousness of the music world.

Alexander mixes Latin, Funk and Rock N Roll on Soulare while singing in both English and Spanish. Soulare opens with Bandolero, one of the most infectious rock songs I’ve heard this year. This melody has been with me since I first heard it. I'd sing along if I knew Spanish, but trust me, this one won’t go away. Mueve rocks out in a highly danceable number that is as infectious as you can imagine. Alexander sings with the fire of a gospel singer and rough hewn voice that is sure to effect hormonal fluctuations in his female listeners.

Alexander slows things down a bit on Changes, an R&B ballad with serious chart potential. He returns to good old Rock N Roll on the frenetic Adelante. This song is built on a viral guitar hook and Alexander’s honey/whiskey vocals (don’t forget your dancing shoes). This was my favorite song on the disc, and I think it may also have significant commercial potential. Other highlights include Abandon El Amor, the upbeat funk-laden rocker Shine and Tranquila. Be sure to check out the bilingual cover of the Bob Marley classic No Woman No Cry.

Omar Alexander may be the voice that carries Latin-based rock to the head of the mainstream. His voice is immediately recognizable and unforgettable. The songs on Soulare are infectious and there is a certain mojo to this recording that seems unlikely to fade over time. I don’t know if it will happen with this CD or one that follows, but if Omar Alexander keeps coming with this type of material he’s going to catch on in a big way. Make sure you check Soulare out.

You can learn more about Omar Alexander at http://www.omaralexander.com/ or www.myspace.com/omaralexandersoulare. You can purchase Soulare as a download through AmazonMP3.
Posted by Wildy at 5:20 AM