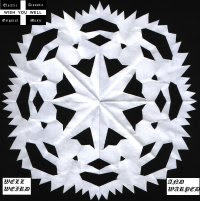 From Cornwall, Southwest, England comes Wish You Well, an eclectic band featuring the omnipresent Aidan on guitar. Dave Wells (drums); Rachael Allen (bass); Dexter Wyatt (bass) and Joe Kingston (bass) round out the core of a rotating mass of musicians that make up Wish You Well. Wish You Well has made a name for themselves over the past few years playing large festivals all over England. Aidan has gained notoriety as one of the top unsigned guitarists on the scene, and Wish You Well continues to grow in sales and name recognition. Their latest recording, Well, Weird & Warped, is a fiercely independent record, striving to distance Wish You Well from artistic comparisons.

Well, Weird & Warped is a hard to classify entry into the Rock N Roll library, offering a mix of Grunge and Garage with the occasional Jam Band spirit. It’s a very Lo-Fi recording, so much so that it’s not something you would expect to see marketed. The guitar work is interesting and varied, but Aidan and crew obviously write for themselves. I’ve not seen the live shows that are spoken of so well in music circles, but I thought this recording lacked the discipline and production to make it really viable. Wish You Well has some good moments, notably the opening track, One Off Special. This track finds Wish You Well sounding like a weird conglomeration of Nirvana and 60’s band The Knickerbockers.

On the other end of the spectrum, In The Garden Of Maiden Bower, this sounds like the musical version of naval contemplation; noodling or jamming without real energy or spirit. In between are songs such as B Movie, Office Food Fight, Ice Man and Get Out, Be Safe, Be Seen. All of these tracks have some potential, but miss out on fulfilling it from the aforementioned lack of discipline and production values. As presented, Well, Weird & Warped is very much a niche recording. There are folks who enjoy this sort of Lo-fi material. Some will call it experimental rock, but there’s really nothing experimental about it. Aidan and Wish You Well have found and established their sound, but choose to present it in a fashion that obscures what is here to be heard. It’s the musical equivalent of having a great candidate show up for a job interview in cut off jeans and a ripped t-shirt. It will appeal to some, but the employer probably won't hear it.
Rating: 1.5 Stars (Out of 5)

You can learn more about Wish You Well at www.myspace.com/wishyouwellband. You can purchase a copy of Well, Weird & Warped through Corporation Records.
Posted by Wildy at 5:00 AM