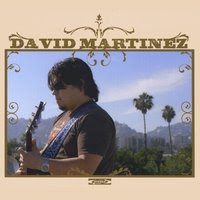 Corpus Christi, Texas-based David Martinez has developed something of a following over the past few years. Significant touring of the U.S. Northwest and West Coast have helped Martinez build a critical buzz as well as develop some very helpful contacts. In 2008, Martinez released his second CD, entitled David Martinez. Produced by Leroy Miller (guitarist - Smash Mouth, Hog), David Martinez is 10 songs of acoustic based folk/rock. Nine songs are all Martinez, and Leroy Miller helped revamp one of the tunes, but it quickly becomes clear why Martinez has generated so much attention.

David Martinez has ups and downs on his self-titled debut. He seems to get a little lost on some of the mid-tempo songs (The Otherside, Waiting), but has a real ear for upbeat folk/pop music. Can’t Find You is incredibly catchy with something of a Del Amitri vibe. What You Need is a great party song. It’s the sort of song that if it hits at the right point in spring it will stay on the radio all summer long. Walk On Air is another good one; an upbeat love song with some funk in its genes and some pretty excellent guitar work. Visions is something of a surprise, falling more into the AOR/Rock category. Great harmonies and a big chorus make this a very memorable tune.

Martinez does well with songs like the opening track, Heal, which sounds like it has Hootie and the Blowfish in its ancestry. Sweet Sister walks the line; a schmaltzy ballad that’s a bit overdone and cliché but has an honest quality that’s endearing in spite of all that. There are a few songs here where Martinez just sounds lost, like perhaps he had a great lyric or chorus or hook that he built a song around but never found the passion for the whole of the song that he did for its genesis. Nevertheless, six songs out of ten are very much worth hearing. The rest aren’t bad, but won’t stick with you either (that’s not a bad ratio).

David Martinez sounds young, and has a fair amount of talent. His voice is just a bit left of center and memorable. He won’t blow you away with his vocals but he is pleasant to listen to. Martinez seems to find moments of true musical inspiration at times on David Martinez, generally in the more upbeat folk/rock tunes. Fans of Pat McGee band, Hootie and the Blowfish, Del Amitri and the like will definitely dig David Martinez. All others should at least hear a song or two that catch their interest.
Rating: 3.5 Stars (Out of 5)