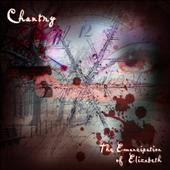 Chantry is the musical alter-ego of Italian guitarist and videogame programmer Alessandro Monopoli. Based in Southam, Midlands, England, Monopoli creates his own brand of gothic/melodic guitar compositions that verge at times on the edge of progressive rock. Chantry has previously produced music for videogames and a demo, but The Emancipation of Elizabeth is their debut album. Chantry features guest artists such as Riccardo Crespi and Enrico Vicario.

Monopoli looks to enroll in the pantheon of guitar rock gods with The Emancipation of Elizabeth. Mixing the melodic lyricism of 1970’s guitar rock with the harder edge of Prog, Chantry bedevils and beguiles with their musical creations. Shades of Malmsteen, Jeff Beck, Clapton, Tommy Shaw/James Young and Eric Johnson rear their heads throughout the ten tracks presented here. Be prepared to be blown away as Chantry opens with Shine, and aggressively rhythmic guitar work with angelic vocals. Monopoli showers and sparks notes, phrases and runs from his guitar like a transformer on fire, filling the listener’s ears with a visceral sense of the music.

Emergence finds Chantry opening up the floodgates on a melodic tear that hint at both the technical proficiency and creative passion poured into the music here. Flawed Archetype plays across the Prog/Classic Rock paradigm with big harmonic guitars, a driving rhythm and neo-Classical construction. My personal favorite track here is Red Roses In The Snow, an epic guitar ballad that won’t leave you alone once you’ve heard it. You’ll also want to check out Velvet Darkness They Fear and L’Amor Per L’Ultima Volta.

Monopoli creates musical fireworks on guitar in a way that is both reminiscent of the classic guitar icons of the rock era and refreshingly new sounding. The Emancipation of Elizabeth is perhaps the most exciting guitar album of the decade, in that it not only allows the guitar virtuoso to show off his chops, but drives musical constructions that are more complex and complete than many in the same genre. Chantry is a must for up-and-coming rock guitarists.

You can learn more about Chantry at www.myspace.com/chantrymusic. The Emancipation Of Elizabeth is available digitally at http://www.tunecore.com/. CDs are just becoming available. Contact Chantry through his MySpace page for availability.
Posted by Wildy at 5:10 AM