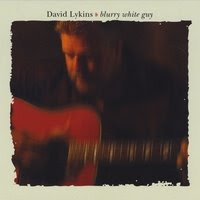 David “Ravin’ Dave” Lykins is a Chicago area actor/singer/songwriter/poet with a reputation for a big voice. His debut CD, 2008’s Blurry White Guy has been described as “subversive country music”, and it’s easy to see why. Lykins takes traditional country forms and imbues them with a not-quite-reckless sense of variety and composition that goes far beyond your typical music row pop hybrid. With a supporting cast including Pat Flynn (New Grass Revival), Chris Leuzinger (Garth Brooks), John Gardener (Dixie Chicks), Dow Tomlin and Jeff Taylor, Lykins has produced one of the more intriguing country albums of the past year.

Blurry White Guy opens with Houston, a Country/Rock hybrid about Hurricane Katrina and the impact it has on the residents of New Orleans. It’s an amazingly upbeat song for the dark, solemn subject matter and has real commercial punch. The family in the song is separated, with the children in Memphis and the parents in Houston. This is probably one of the best musical paeans to the Katrina Disaster that anyone has written/recorded. Greetings From The Riviera is a great story song that is heart-breaking in its picturesque detail. Let Me Carry This has a wonderfully dark atmosphere that frames Lykins’ All-American country voice, and while Lykins writes in essentially classic country forms, he often builds sound and structure into his songs that separate them from the pop/country pack.

A personal favorite here is Day After Valentine. It’s a sweet song without sounding hokey or trite and likely to be a fan favorite. Come Along is another favorite; a song that captures some of the Celtic spirit of Country and Western Music. You’ll also want to check out Flying and This Is My House.

David Lykins sounds enough like popular country artists to get some commercial attention, with enough variation and complexity in his music to earn some respect from fellow musicians. Blurry White Guy is a perplexing, intriguing and ultimately rewarding listen. It’s popular music with a subversive core. Accessible to consumers of the mindless pop machine that has overtaken parts of Music Row, but deep and wide enough to interest people who still listen to the music. Blurry White Guy, indeed.

You can learn more about David Lykins at www.myspace.com/ravin12. You can purchase a copy of Blurry White Guy at www.cdbaby.com/cd/davelykins.
Posted by Wildy at 5:10 AM