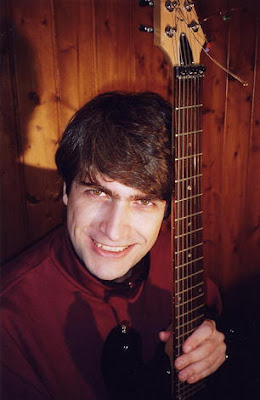 Lelio Padovani is a guitar player and teacher originally from Parma, Italy. With a life-long love of guitar influenced by the likes of Eric Johnson, George Lynch, Vinnie Moore and Joe Satriani, Padovani has developed a sound that ranges from sweet and melodic to hard-rocking alternative. Padovani’s fourth release, Chasing The Muse covers the entire spectrum, but focuses primarily in the soft rock/muzak range.

Chasing The Muse is a collection of eight songs written in an almost ambient classic rock style. Padovani’s guitar is the vocalist here, providing melody lines in the form of solos and flourishes against a bed of keyboard, bass and percussion. The opening track, Invitation, sounds like guitar work you might find on a Tommy Shaw/Jack Blades album on in a slower song from the post-DeYoung Styx catalog. Chasing The Muse is more of an Eric Johnson hybrid; the Rock N Roll version of elevator music, if you will. Rainy is a wonderfully moody composition featuring melodic guitar work, whereas Light And Shadow is more of an 80’s arena rock tune that begs for a vocalist to be added. Other highlights include New Day, Ballet and the alt-rocker Better Days.

Lelio Padovani steps forward with the highly entertaining and well made album Chasing The Muse. Guitar players will love this disc as Padovani makes the rounds of Classic, Alternative and Melodic Rock styles, always with that air of ambience close by. A few of the songs here scream to be more than just instrumental pieces. It would be interesting to see what Padovani might do in an ensemble format with a good singer and a strong rhythm section. The possibilities are staggering.

You can learn more about Lelio Padovani at http://www.leliopadovani.com/. You’ll have to contact Padovani directly through his website to get ordering information, as I was able to find no online outlets selling his CD.
Posted by Wildy at 5:00 AM