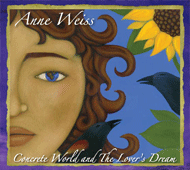 Anne Weiss is the consummate professional. From recording with such luminaries as Shawn Colvin and Patty Larkin to performing with the likes of Ani DiFranco and Cephas & Wiggins, Weiss is a performer that other musicians look to with respect. She’s also an Allen Ginsburg Award winning poet, a former street gang member and political organizer. Weiss’ fourth CD, Concrete World And The Lover’s Dream is a collection of pop, country, blues and rock and roll that will surprise and delight listeners with Weiss’ ability to change character and presentation without losing the essential sense of her self. Let’s check it out!

Weiss opens with Ain’t Got No Reason To Lie in a deceptively bluegrass tinged rendition that is amazingly straight forward when compared to what comes later. It’s a refreshingly uncomplicated take on the song that is startlingly apropos. The Song About The Affair That I Am Not Having finds Weiss moving a little more in the Soul sound she is comfortable with, but still staying with a somewhat light, pop sound. It’s as if with the first two songs Weiss is leaving herself open to multiple genres (Country, Americana, Pop) whereas she later moves more solidly into a Soul/R&B sound. Special Delivery is built around a beat box core that ties everything else together. This is one of the more intriguing songs on the album as we get to see the real shading of Weiss’ voice here for the first time.

Anne Weiss drops any and all pretenses on Concrete World And The Lover’s Dream, bringing out every ounce of soul she possesses in a performance not to be missed. It just keeps coming on Robert Johnson’s Come On In My Kitchen, The Blues/Soul sound here is as thick as cream cheese. Weiss reminds me distinctly of one of my favorite female blues vocalists, Pamela Betti. There’s a Janis Joplin vibe here as well as Weiss opens up the throttle on a voice that has transformed from a vaguely sweet pop voice to a husky and worldly blues/rock sound in the course of five songs. Write Me A Few Of Your Lines is the highlight of the album. The classic tune from Mississippi Fred McDowell sounds like it was written for Weiss, and she does it full justice. Other highlights include Fall, Shadow Of Doubt and the cover of Jackson Browne’s These Days.

Anne Weiss fits equally well into the Country, Blues and Rock genres that she dances across on Concrete World And The Lover’s Dream. Her voice is a diamond in the rough. Not smooth or pretty, but hewn by life and effort and full of a natural beauty that can’t be crafted. Weiss owns the songs she sings and wears them like a favorite dress. The real Weiss is millimeters from the surface in each song, striving to break through and touch the listener like a breeze. Concrete World And The Lover’s Dream is a fine album.

You can learn more about Anne Weiss or purchase a copy of Concrete World And The Lover’s Dream at http://www.anneweiss.com/.
Posted by Wildy at 5:20 AM