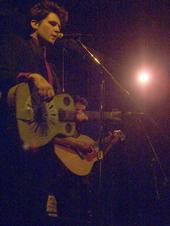 Sean McArdle has come a long way, both physically and musically, to release his latest effort, the self-released Northern Charms. The former front man of Driving By Braille and Lookout! Records recording artists The Cost, McArdle left his home base in San Francisco to resettle in Washington, D.C. Embracing the universal themes of love and loss, McArdle has crafted a nuanced and elegant collection of songs that walk the ever receding line between Rock and Americana.

Last Words opens on a gritty, subdued note. McArdle's voice plays perfectly here in an unaffected performance that is plainspoken and earthy. Two Brothers comes out in a finger-pick style that bespeaks of a classic 1960's folk/rock style. McArdle invokes sonic images of Nick Drake here, and this may be the best composition on the album. It's a song you could hear other artists picking up and running with. 56th Street reminded me strongly of the songwriting style of Dave Matheson (formerly of Moxy Fruvous). This is classic 1970's AM Radio folk/rock, as if Dan Fogelberg wrote music for Drake or Tom Waits. Other tracks worth noting include The Long Walk, Still Working, the Hank Williams-esque Don't Believe Me and Follow In Kind.

McArdle appears to have undergone a transformation since his Lookout! Records days. Whether the time with Driving By Braille saw many changes or whether it was the cross country move and starting over in a new place, McArdle has found the clarity of introspection on Northern Charms. The lyrical work here is intelligent and coherent. No one is going to mistake McArdle for a poet laureate, but the material is broken down into honest and forthright passages full of truth, observation and emotion. The musical arrangements in general are Americana gothic representations of mood or place full of subtlety and grace. They neither stand out nor fall behind, but act as the perfect counterparts to his lyrical forays. The result is a solid record from start to finish. Northern Charms is not generally the kind of record that will live in your CD/MP3 player constantly for the first few weeks you own it, but it's the sort of album that will become a regular listen for a long time to come.

You can learn more about Sean McArdles at http://www.seanmcardle.com/ or www.myspace.com/seanmcardle. Sean McArdle's music can be heard in rotation in Starbucks stores on PlayNetwork. Northern Charms will be released in the coming weeks. Keep checking McArdle’s web page for availability!