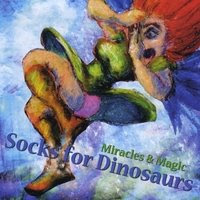 Miracles And Magic opens with Here In This Moment, an avante-garde rock recording in the spirit of The Rheostatics. The lead vocalist on Here In This Moment even sounds a bit like Martin Tielli. The song itself is quite a pleasant listen, although the peripheral instrumental flourishes can get a bit distracting. Brazil plays on the edges of Latin Jazz. The melody line is quite listenable but the arrangement seems a bit out of time with the melody and lyrics. The odd placement/arrangement of instrumental soliloquies does end up mudding the musical waters a bit, although it seems that is perhaps the intent here. Tired explores the dark waters of sleep deprivation in an arrangement that wants to be beautiful but never quite crosses that line. Dark, minor key secondary melody lines ive this an almost disturbed sound that sticks out in the mind.
Is Love Real asks the age old question not in the dulcet sweet tones normally heard but in dark and disjointed minor keys; juxtaposing love and attraction as opponents rather than components of a whole. Weary Angel is a tribute that is sweet and full of sentiment that attempts to capture the melancholy grace of a classic country tune. In this instance Socks For Dinosaurs succeeds, although the running together of violin and pedal steel guitar in the bridge creates more dissonance than appealing sound. East Coast Land is an odd arrangement that sounds like it escaped from a 1970’s jazz vault. The melody and base arrangement are at least interesting, but there’s just too much going on in the periphery to allow a subtle intrigue to develop.

Change is as close as we get to a truly marketable tune, drawing on 1970’s soul and funk influences. This duet has some real highlights but still gets caught in Socks For Dinosaurs’ tendency to overproduce the songs presented here. It’s as if melody and harmony are never enough; like a painter who draws a perfect flower but then continues to add embellishment and effects until the perfection and even the character of the original is lost. The incessant tendency to tinker to make the music sound perfect to the creator is one that comes up often in music as well as other art forms can be the quick path to musical peril. Tar River follows somewhat the same path, coming across as a transitional piece from an off-off-off-Broadway show. Late At Night closes out the set in a select piece of jazz noir. This is the most enjoyable track on the disc, as Socks For Dinosaurs seems to pull back just a bit and let the song breathe.

Socks For Dinosaurs is afflicted with an inability to let their songs be songs. The endless push for the perfect sound or note or phrase turns art into a mercurial pixilation of notes and silence; devolving from song into minutiae devoid of real personality or character. While there are a couple of bright moments on Miracles And Magic, in the end it was a difficult listen. Technically brilliant performances just get lost in all of the detail and enhancement; squeezing the intended spirit from the music. This will appeal to a narrow demographic of jazz fans but isn’t likely to find much traction outside of that small group.