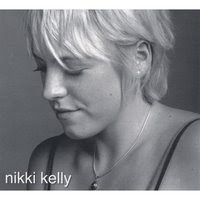 Nikki Kelly is a singer/songwriter and filmmaker based in Albuquerque, New Mexico; one of those artists whose creative urge can’t be satisfied by just one outlet. With a reputation for being silly or strange (self-professed), Kelly writes intriguing and witty folk/pop songs. The child of two music lovers (her father was a blues musician), she has some similarities to Canada’s Sarah Slean, although not quite so solidly ensconced in European musical themes. Her debut CD, Nikki Kelly, displays influences ranging from Tom Waits to Mazzy Star and even Feist, but in the end it’s all Nikki Kelly, unvarnished and unrestrained.

Nikki Kelly is something of an acquired taste, I believe. She has some great moments on her debut CD, Nikki Kelly, but also some moments that may leave listeners scratching their heads. Kelly starts off on a great note with the song Franklin, where she seems to be singing to a baby and trying to get inside the baby’s perspective of all that’s going on around him. The song is cute and fun and warm. Do Do Do is a sweet little love song. It comes across as young but amiable. Nikki Kelly has quite a sense of humor, it would seem. It infuses and illuminates her songs like a nightlight, casting as many shadows as light. Apt. 10 has an ironic sense as Kelly sings about singing someone else’s song to the tune of 4-Non Blondes’ What’s Going On.

How Do You Say is one of the highlights of the album, although not for the faint of heart of ear. It’s funny, angry and brazen all at once, and one of the best ways I’ve heard to learn how to swear in Italian. This song has a definite Tom Waits vibe to it. Bored is mildly humorous – the sort of thing you might have expected at a Jewel show early in her career. It leads into Dark Country, which is probably the best pure songwriting on the album. Starkly honest and vulnerable, Kelly brings out a sonic beauty in this one.

Many of the songs on Nikki Kelly are less than two minutes; ideas turned into jingles and songs on a moment’s notice, perhaps. Nikki Kelly suffers for these bits of musical flotsam. There is real songwriting talent here, and Kelly certainly draws on it, but Kelly is still fascinated with being cute and funny. Fans of Meryn Cadell and early Barenaked Ladies will get a kick out of Nikki Kelly, but the contrast of paths is an important one to pay attention to. One became irrelevant and the other is still substantially around. Which path will Nikki Kelly choose?