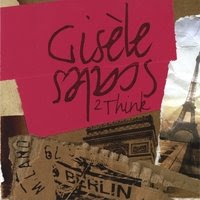 Sydney, Australia’s Gisele Scales is no stranger to European audiences. Her song Mother Egypt, with the band Vega, soared to the top of the European Pop charts. She’s also recorded with the likes of Midnight Oil, Eurogliders and Jeannie Lewis. The vocalist and electronic violinist released 2 Think in 2008, full of sizzling fiddle runs and big dance beats. What struck me most about this CD is that it is amazingly one dimensional for an artist of Scales’ talent. The violin here is more of an accent than an instrument; the album is so over-produced that any real sense of musicality has been reprocessed into an unrecognizable state. This is a heavy electro-dance album more in the line of Kraftwerk than of fellow electric fiddler Lili Hayden. Many of the songs here will do well on the club scene, but much of the album lacks the musical soul I was expecting.
Scales shows flashes of virtuosity (Can U Love 1 Another), but in generally becomes a slave to the beats and production. In the end it is what it is, a dance album made up of mass produced beats, rhythms and electronic sounds that is certain to do well on the club circuit, but there’s no challenge or stretch for either Scales or the listener. 2 Think had the potential to be so much more.

You can learn more about Gisele Scales at www.myspace.com/myspacecomgiselescales or http://www.giselescales.com/. You can purchase 2 Think at www.cdbaby.com/cd/giselescales or download it through iTunes.
Posted by Wildy at 5:00 AM