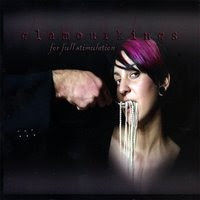 GlamourKings’ Michael Urge grew up in the hedonistic New York City suburbs on Long Island, where the ravages of reality television and a celebrity obsessed society have created a sub-culture where insecurity and imperfection are glossed over with cosmetic surgery and accoutrements intended to distract from life’s little flaws. Becoming disaffected with this culture, Urge threw his frustrations into his music. The immediate result is the debut album from GlamourKings, For Full Stimulation. GlamourKings ridicule the society we have wrought in danceable terms while kicking at the keystones of this faux society. How Rock N Roll is that?

The GlamourKings have it all. There’s the soulful, Alt/Goth-Rock vocals; the highly programmed and hip electronic arrangements; melodies and harmonies that are memorable and a punk-pop sensibility that just won’t quit. Depending on the song the combination either works wonderfully well or flops horribly. Victim clicks as GlamourKings come off sounding like Fred Schneider singing with The Cure. The opening track, Candyland, doesn’t fare so well. The elements are all good on their own, but when forced together they create something of a sonic mess. On Blue Rose GlamourKings make a play to sound like Nine Inch Nails (and mostly succeed). It’s not until B!tch that GlamourKings really hit their stride, creating one of those post-punk rockers that would have done wonders on college radio 15 or 20 years ago. GlamourKings at their best are catchy and energetic – the sort of thing you listen to time and time again. At their least glamourous the GlamourKings can be messy and hard to stay with.

You’ll want to check out the NIN-goes-to-the-disc turn on One & Only and the rockin’ Want You More. Other tracks worth noting are Simply Kind, Addiction, Summers Eve and the sonically obtuse Desert Skylife.

The GlamourKings are probably an aquired taste. For Full Stimulation makes full use of the electronic expertise and rock influences that GlamourKings lay claim to. They’re a very talented duo who deserves to be heard. Like many bands they hit on some and miss on some, but the hits make the misses worth listening to.
Rating: 3 Stars (Out of 5)

You can learn more about GlamourKings at http://www.glamourkings.com/ or www.myspace.com/glamourkings. You can purchase a copy of For Full Stimulation at www.cdbaby.com/cd/glamourkings.
Posted by Wildy at 5:05 AM