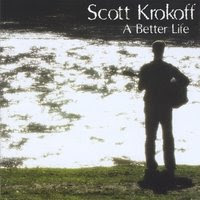 If more tax attorneys quit their jobs and played music the world would be a happier place. Yes, Scott Krokoff is a tax attorney. Working for some of the most prestigious firms in the New York City, Krokoff gave it all up to pursue his first love of making music. With a highly palatable singer-songwriter sound reminiscent of folks like James Taylor and John Mayer, Krokoff offers up his debut album, A Better Life, for all to hear.

Scott Krokoff’s sound is smooth almost to the point of too much at times. Don’t get me wrong, I really enjoyed the album, but by the end I wanted Krokoff to take some risks with the sound. Krokoff is a heart-on-my-sleeve songwriter who writes about love and love alone (mostly). The first nine tracks on the album are consistently polished songs about love, losing love, desiring love or Sparrows. Sparrows is an intriguing song, by the by. It’s an amazing acoustic guitar arrangement and a melody so sweet it will stick with you indefinitely. Songs such as A Better Life, Tomorrow’s Coming and Glimpse Of Your Face effectively represent what I think of as “phase I” of A Better Life.

By the time Krokoff got to Holy Fire I was ready for a change, and Krokoff served it up with an Eagles style country/pop hybrid. It’s a gorgeous arrangement and another melody that won’t quit on you. Autumn Sky sticks with the Eagles-reminiscent sound, and is my favorite track on the disc. The song has great vocal harmonies and complementary vocal lines and sounds inspired here. A Better Life closes out with Do You Wanna Play, the most energetic song on the disc. This song will get your feet moving with its mix of funky piano and horns.

Scott Krokoff is a very talented songwriter. He has a commercial touch that may allow him to break through the radio wall in something like an Adult Contemporary format, but as an album the sound is just too uniform. I really enjoyed several of the songs here, but the dynamic didn’t change much until the last song, leaving the base impression that much of the material here sounds the same. It doesn’t in fact, but varying sound and style across an album is one of the ways to keep the listener engaged. As it is A Better Life is a pleasant listen, but also the sort of one that can be relegated to the background a little too easily. Scott Krokoff shows here that he’s good enough to challenge his listeners. Hopefully he will next time around.
Rating: 3 Stars (Out of 5)

You can learn more about Scott Krokoff at www.myspace.com/scottkrokoff. You can purchase a copy of A Better Life at www.cdbaby.com/cd/krokoff.
Posted by Wildy at 5:00 AM