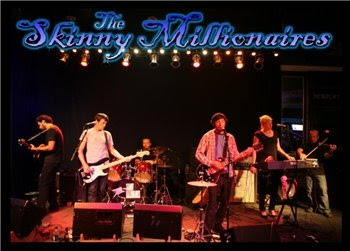 Newport, Rhode Island’s The Skinny Millionaires aim to make old sounds new on the sampler CD from their forthcoming self-titled debut. Mixing elements of folk and punk behind a vocalist who tries gamely to sound like Bob Dylan. Led by vocalist Mr. Mike and violinist Meghan O’Connor, The Skinny Millionaires craft a unique and eclectic sound that works well at some points yet founders at others.

The album opens with Rare Bird, in an interesting gypsy-folk style, with a palpable energy and drive that’s Dylan-esque. Up next is the exceedingly bizarre Night Of The Creeps. As this song becomes more symphonically engaged it becomes more of a mess. My favorite track on the CD is Too Dark, a wonderfully mellow folk tune. Other highlights include Keep Dyin’, Come On and Be Okay.

The Skinny Millionaires mix elements of classic folk and punk rock in their sampler CD. It works at times and at other times it falls apart. On the whole it’s an interesting disc with passable vocals from Mr. Mike and some amazing violin work from Meghan O’Connor. The Skinny Millionaires present an interesting listen on the sampler CD. It will be interesting to see whether they can expand on this for the full-length release.
Rating: 3 Stars (Out of 5)

To learn more about The Skinny Millionaires, check out www.myspace.com/theskinnymillionaires.
Posted by Wildy at 1:43 PM