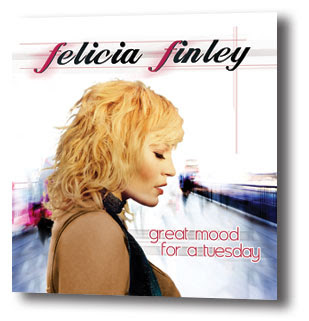 Broadway fans have been familiar with Felicia Finley for some time now. Starring roles in The Wedding Singer (Linda) and Elton John’s Aida (Amneris) gained her significant attention and respect in the Broadway community. You may have also seen Finley in the Spike Lee films 25th Hour, Summer Of Sam and He Got Game. Anyone who’s heard Finley’s voice on stage had no question about her ability to sing, but it’s always curious to hear how Broadway performers cross over into the pop/rock world. On Valentine’s Day of 2009, Finley releases Great Mood For A Tuesday in select markets, with digital releases hitting on March 14, 2009. One thing is for certain: Felicia Finley can rock.

Finley serves notice write from the opening notes of Satin Soldiers; a dynamic, Classic/Prog Rock tune with some very impressive guitar work. Finley makes use of a powerful and wide-ranging voice here to establish that she’s not just a Broadway diva trying to fake a rock image. The backing vocals here remind me of something you might hear on a classic Styx album, but Finley will make you forget anyone else is singing. Finley switches gears a bit on Stories. This is a Big Rock Ballad, complete with big guitar solos and some great harmonic acoustic guitar work as well.

My House Tonight will catch your ears. It’s a classic “bad girl” song; incredibly catchy. My House Tonight is built on a classic Rhythm N Rock base with dynamic vocals like only Finley can deliver. You won’t be able to get this out of your head. If this song gets released in advance of summer, with the right push it could be everywhere. I think this is the type of rock song music fans are hungry for and it could be huge. Great Mood For A Tuesday, the title track, was the song on the album I enjoyed the least. It’s a decent song and well sung, but it just seemed out of place among the other songs offered here.

Closin’ Time is a catchy, furtive tune. It reminded me, musically, of something you might hear on a Shaw/Blades album. Closin’ Time has a very mellow center to it, in spite of the big chorus. It’s crying to be a country tune. Tired Of Losing Sleep caught my attention on the first listen through; it’s a bit of the beaten track, musically. The song allows Finley to display some of the softer, darker tones in her voice. Perhaps it brings out the Broadway side of her just a bit – it’s a very theatric song without sounding like it came from a show. Blanket was a fun listen, although a bit generic. There’s some great harmonica work in this one. The album closes out with Fire Escape, a heavy Rock N Blues tune built on some blistering guitar work. This song is a Wow, all the way around; an exclamation point to end the album the way it started, rocking hard.

The vocal discipline required for performing on Broadway is often quite different than the training one might take to sing Rock N Roll. While the line has blurred some over the years with the advent of rock musicals, it is still unusual for a Broadway performer to cross over to Rock or Pop without difficulty. Folks like Adam Pascal and Idina Menzel have done it with varying degrees of success, but Felicia Finley may have turned in the most dynamic and amazing Rock performance of any Broadway baby in the past decade. Listening to her voice, it would actually be quite electric if she and Pascal were to sing together at some point. I digress. Great Mood For A Tuesday is a classic album. The energy is great, the musicianship strong and the vocals are downright amazing. Get it. Listen to it. You’ll love it.
Rating: 4.5 Stars (Out of 5)

You can learn more about Felicia Finley at http://www.feliciafinley.net/ or www.myspace.com/feliciafinley. You’ll be able to order copies of Great Mood For A Tuesday on her website starting February 14, 2009. As an aside, I highly recommend you check out the material Finely has streaming on her MySpace page. If these are any indication then her live shows must be absolutely amazing. You can also hear Finley on soundtracks for The Bubbly Black Girl, Happy Days - A New Musical and Forbidden Broadway 2001: A Spoof Odyssey.
Posted by Wildy at 6:04 AM

Wow - Great Review - Very thourogh on every song - Will have to give it a listen for sure - thanks!