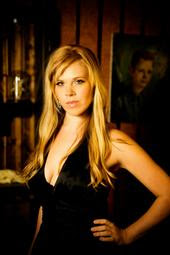 Sarah Tracey brings torch music into the twenty-first century with the subtlety of an axe slicing through butter. Encompassing the earthy tones of Billie Holiday and Kay Starr, the stratospheric reach of Judy Garland, and the va-va-voom appeal of Anne Margaret, Tracey steps right out of another era with a bang. Born and raised on Chicago’s North Shore, the classically trained pianist quickly found that city’s love for jazz and blues. While her songwriting style is definitely influenced by her classical background, Tracey writes the soundtrack to a modern day, black and white film noir on Cards On The Table (EP). Hold on to your hats.

Cards On The Table appears to have been recorded live without an audience. The ambience of the recording would suggest that the attempt was made to capture an unshaped, live performance it its pure raw energy. If so, this approach has worked magnificently. Sarah Tracey opens with This Plum, a sultry torch song about the draw of forbidden fruit; alternating between pure desire and a sort of emotional sadism. Up next is Cards On The Table, an open heart appeal using poker as a metaphor. The arrangement has a bit of French Cabaret Jazz in its heritage, like something you might hear in an old black and white private detective flick. Heart On My Sleeve is a primo performance from Sarah Tracey, who just seems to get better and better as the EP progresses.

For I Want To, Tracey steps back a bit to deliver an electric performance based in the heartbreak of unrequited love. This is far and away the best track on the CD, and Tracey sells the song with all of her heart and soul. How Does It Feel is a wonderfully dark song of base devotion and wanton thoughts. Sarah Tracey sings this song like she’s lived it, assuming the role of the protagonist like slipping on a glove. As a sort of musical/spiritual redemption, Sarah Tracey comes up from the depths of jazz era depravation for Why Should I Be Blue? The promise of love rises and falls with the ebb and flow of Sarah Tracey’s voice while the listener dangles on the edge of his/her seat.

Sarah Tracey is a classic performer. Her voice is distinctive and warm and smoky with just a bit of an edge to it. She own her genre like only the best can. The material here is perfect for her voice and musical aspect, and Sarah Tracey makes the most of the six songs presented on Cards On The Table. It’s a definite must-hear for vocal jazz enthusiasts or anyone who loves a great vocal performance.

You can learn more about Sarah Tracey at http://www.sarahtracey.com/ or www.myspace.com/sarahtracey. No word on availability Cards On The Table, although you can stream the songs on Tracey’s MySpace page.
Posted by Wildy at 5:20 AM

Amazing! Thanks for sharing.