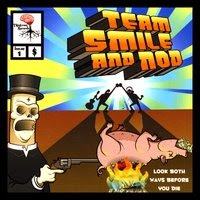 Team Smile And Nod – Look Both Ways Before You Die
2008, Thinkroot Records

I don’t know if the term is PC these days or not, but a few years back we would have called Team Smile And Nod proud purveyors of geek rock. You take a female folk singer and her acoustic guitar and combine them with an electronic music DJ/composer and create a series of sometimes funny, politically and progressively motivated songs and you have geek rock. Kara Elizabeth and Rich Ratvasky call it Team Smile And Nod. The Ohio duo explore issues such as capitalism, vegetarianism, lesbian love and GLBT issues across seventeen original songs and three remixes on Look Both Ways Before You Die. There are highs, lows and all stops in between. Let’s check it out.

Team Smile And Nod covers the whole spectrum on Look Both Ways Before You Die. There are moments that are almost sublime and there are moments that take forever to pass. Kara Elizabeth and Rich Ravatsky are each other’s saving grace musically. Kara Elizabeth’s songwriting style seems to come from a very depressed, disaffected place at times, and Ravatsky has all the aural appearances of experimenting with sounds to the point of losing musical direction. Neither of those tendencies ever completely take over on Look Both Ways Before You Die; instead, Ravatsky and Kara Elizabeth mostly balance off each other, one pulling the other back from the brink time and time again.

When they click together it can be almost magical. Kill Myself To Death is a wonderfully bizarre track. In musical terms this is a great pop song, although the morose subject matter isn’t likely to break rotation on MTV anytime soon. Even Tho is a moment of clarity amongst the musical madness that envelopes Team Smile And Nod. While there’s a lot of lyrical repetition in the chorus that does little more than fill space, this still turns out to be a great composition. On the other hand, The Party turns into an angry diatribe against Kara Elizabeth’s sister that sounds more appropriate for a Springer episode than a song. While it constitutes the retelling of an event that apparently occurred involving family acceptance of sexuality, the anger and vitriol is more likely to entrench existing attitudes than doing anything to break them down.

Much of Look Both Ways Before You Die is angry music projected through an ideation of humor that generally fails the humor test. The sophomoric nature of much of the material here makes Team Smile And Nod’s attempts to discuss GLBT issues less likely to find willing ears among those who might disagree. There’s a time and a place for such things of course, but the material here isn’t witty enough or intelligently stated enough to get away with being mean or petty. In the end you have perhaps three or four songs that are truly well composed, listenable folk/pop tunes with something to say. The rest are the musical equivalent of a disaffected teen diary. At their best, Team Smile And Nod capture the disaffected spoken word style and humor of Meryn Cadell. At their worst, they are a Saturday Night Live sketch gone wrong. The high points are good, but the low points are tough to get through to get there.

You can learn more about Team Smile And Nod at http://www.teamsmileandnod.com/. You can purchase a copy of Look Both Ways Before You Die at www.cdbaby.com/cd/teamsmilenod.
Posted by Wildy at 5:10 AM