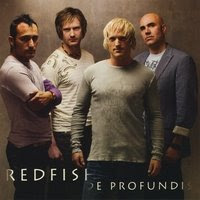 Based in Okanagan, British Columbia, Canada, Redfish are expanding their reach far beyond their home base. With album sales stretching as far across the globe as China, folks are starting to catch on to this dynamic band in a big way. With the soaring musical ideals of U2 and the quirky grit of The Tragically Hip, Redfish brings a unique sound to the table that is guaranteed to catch your ear. Redfish’s latest release, De Profundis, mixes commercial flavor with the sort of heady and interesting rock sound that is a sure recipe for success.

De Profundis gets off to a mixed start on Look On. This is a great guitar rock song, but the vocal effects on the song make it impossible to understand Edward Hagman, turning a great song into a good song. Breanna is one of the highlights of the disc. Co-written with Grammy winning producer Randy Cantor (Ricky Martin, Fugees, Bon Jovi) and Dennis Matkosky (who previously wrote Maniac for Michael Sembello), Breanna is the sort of dynamic rock song that gets eaten up on commercial radio. Big harmonies and a little flare for glam come across in a song that sounds like it might have come from a collaboration between The Tragically Hip and 54-40. Citizen is a call to action song (“We al came awake in a state of disgrace”) that is poignant and powerful.

Redfish take an ironic turn with the cover of Eric Burden & The Animals’ Sky Pilot; a song that could easily have been written regarding a recent U.S. President. Be sure to check out Anteroom, a big guitar rocker with blues in its heritage and some really funky guitar work. Also on the menu is All Your Life; opening with a Hendrix style guitar soliloquy, All Your Life is the song on De Profundis with the greatest commercial punch. Other highlights include At The End, Talk To Me and Lonestar.

Redfish have created a sound that is both stridently independent of commercial trends and yet with significant commercial potential. De Profundis has significant breakout potential with the right push or breaks. British Columbia has become a hotbed for dynamic and original sounding rock music, and Redfish is at or near the head of that movement. De Profundis is a must-own CD.

You can learn more about Redfish at http://www.redfishmusic.ca/ or www.myspace.com/redfish. You can purchase a copy of De Profundis at www.cdbaby.com/cd/redfish2.
Posted by Wildy at 5:54 AM