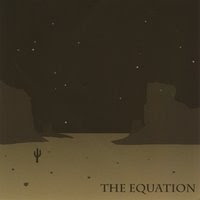 Oxcart comes blasting out of Portland, Oregon with their 2nd studio album, The Equation. Released in 2008, The Equation inherits its characteristic style from influences such as Nirvana, Queens Of The Stone Age, Pink Floyd and The Flaming Lips, with just a pinch of Spacehog thrown in. Recorded in the studio of Windham Hill violinist Billy Oskay, The Equation was recorded and produced almost entirely on vintage analog recording equipment, helping Oxcart capture a more organic sound than is possible on purely digital recordings.

Equation leads off the set; a rough and ready alternative guitar rocker with dark undertones. Office is a jazz/acid-rock fusion piece reminiscent of classic Pink Floyd. Gambler, Pt. 1 has a very heavy guitar rock sound, whereas Gambler, Pt. 2 has a sparse electronic sound that reminded me oh James Young/Jan Hammer’s Prisoner Of War. Explosions is a unique and disturbed composition that holds the interest. Genesis is a Floydian transition with some spoken word accoutrements. Teatherball is a punk rock anthem made for pogo dancing a pit jumping. What becomes clear, and quickly, is that Oxcart has an identity crisis.

Oxcart has so many directions musically that they seem to have a hard time developing any sort of coherent, consistent sound. It’s obvious that their influences and musical tastes are very divergent, but rather than trying to meld something new out of these sounds Oxcart tries to cover all the bases. In a single-based retail download environment this may be a way to maximize sales, and it may appeal to the band, but it’s not going to find wide commercial appeal. It’s obvious that there are some very talented musicians here, and the diversity of sound is great, but even Oxcart sounds like they occasionally get a little overwhelmed with all of the changes. Consequently The Equation is a musical Tautology. It is what it is, but the various parts never quite meld together to make something greater.

You can learn more about Oxcart at http://www.oxcartmusic.net/ or www.myspace.com/oxcart. You can purchase a copy of The Equation at www.cdbaby.com/cd/oxcart2.
Posted by Wildy at 5:00 AM