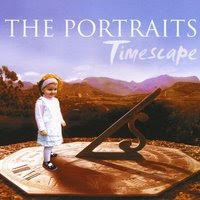 The Portraits defy easy definition. The duo, comprised of Galway’s Lorraine Reilly (guitar, vox) and Bristol’s Jeremy Millington, s one of the most unique and haunting acts to come across this desk. Compared favorably to The Beautiful South by one producer, The Portraits are something of an Art-Pop band based in stirring guitar/piano arrangements laced with doses of cello, flute, trumpet, world instruments and electronic sounds. Reilly and Millington met while teaching on The Isle Of Wight. Moonlighting quickly turned into a full-time pursuit; crafting vocal harmony arrangements that fall somewhere between a Brian Wilson wall of sound and a chamber choir. The Portraits recently released their sophomore effort, Timescape. As the Portraits grow together they continue to break new and breathtaking musical ground.

Jeremy Millington brings a warm and pleasant voice to The Portraits as an accent to his ingenious piano creations, but Lorraine Reilly is the vocal wunderkind of the duo. Reilly delivers her vocal lines in a sweet and amber-hued voice that is pleasantly unforgettable. The arrangements, in general, are complex and intriguing, and no aural detail is overlooked. The album opens with Poppy Song, one of The Portraits new forays into electronic music. It’s a great introduction to Reilly’s voice with great harmonies and some solid trumpet work, but is probably the most lightweight track on the CD. Songs like Autumn and Shield are more musically aesthetic, crafted in the rise and fall of musical tides for the sake of sound. Bitter is more socially conscious, dwelling on a variant of The Golden Rule.

Precious Red is the star of the album. The song is achingly beautiful in arrangement, and anyone out there who’s ever lost a loved on will find pieces of that person in this song. Real World would be a favorite on most any other album; it’s a sardonic look at what happens as people transition from carefree youth to responsible adult, and the clashes that occur between those still in the former world and the newly “minted” adults. Other highlights include the ethereal See Through You , Virtual and Fame.

The Portraits can’t be called a pop band. They’re not Rock N Roll. The best description for them might be something like Chamber Pop. Steeped in elements of classical construction, The Portraits write pop songs that are intelligent, multi-faceted and inordinately above the pop throng. The pairing of Lorraine Reilly and Jeremy Millington has resulted in a rare bit of musical alchemy that is too good to ignore, and probably too good to ever be truly “popular”. Timescape is like a dream from which you awake disappointed that the dream is over. Luckily, all you have to do is push play...

You can learn more about The Portraits and even purchase a copy of Timescape at http://www.theportraits.info/.
Posted by Wildy at 5:10 AM