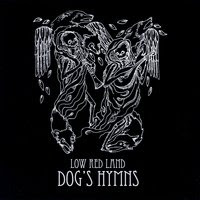 Yet another expatriate band from Boston, Low Red Land relocated to San Francisco and took up a heavy touring schedule. A dynamic songwriting style has garnered them significant attention and gains them new fans at every show. In the same musical vein as folks like Lucero, Fugazi and Crazy Horse, Low Red Land exploits unfluences ranging from Rock to country to folk to hardcore. Their debut album, Dog’s Hymns, hit shelves in 2008. Their reputation as a big rock band precedes them; let’s see how Dog’s Hymns plays.

I found Dog’s Hymns to be a very experiential album. In a case like this it becomes less important to talk about specific tracks than it does to discuss the general mood, affect and experience of the album itself. My initial impression is that Low Red Land is in some ways a throwback to the AOR Era of music (not in sound, per se, but in style and approach). The closest comparison I can come up with for Low Red Land is Canadian legends the Rheostatics. Vocalist Ben Thorne sounds like Glen Phillips of Toad The Wet Sprocket, and this easy vocal approach is set up against the vibrant rock sound of the band. My personal favorite track is Hunt Song. Big guitar and a driving rhythm sell this rocker with a distinct pop sensibility. That is the other thing that sticks out about Low Red Land; their pop sense. Even the most rhythmic rock tune has a light and airy feel about it like it has been kissed by the pop gods. Dog’s Hymn is an off-center example of this quality. Also a potential winner is Landmark. Battles goes the Americana/Rock hybrid route, sounding like Tom Petty & The Heartbreakers but with a fuller sound.

The most unusual song on the CD is Goodnight Moon; this extremely inventive composition makes use of unusual and distinct chord progressions to alter the soundscape; sufficiently capturing the attention of even the most casual listener. Other highlights include Better Angels, Wovoka and Duke.

Low Red Land is a little out of the mainstream sonically, but has such a delicious sense of pop musicality that they might just pull the mainstream their way. Dog’s Hymns displays the type of unique song craft that is both the bane and boon of popular music. Make sure you take a few minutes to check out Low Red Land online. Not everyone is going to like it, but I am betting more will than won’t. A strong debut.

You can learn more about Low Red Land at http://www.lowredland.com/. You can purchase a copy of Dog’s Hymns at www.cdbaby.com/cd/lowredland2.
Posted by Wildy at 5:00 AM