Review: One Step Away - One Decision 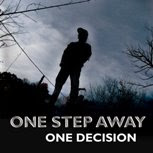 Andover, Massachussets quartet One Step Away has taken the Boston music scene by storm, winning the Boston Music Festival’s Alternative Rock genre in 2008. Led by the lyric rock lead vocals of Adam Carrington, One Step Away blasts away with a heavy rock sound that borders on Prog and 80’s hair-metal sounds with big guitar solos, big choruses and an arena-ready sound. Their debut release, One Decision, debuted in December of 2008, just seventeen months after the bands inception.

One Step Away opens up with In This Moment, a wonderfully musical and melodic hard rocker that contrasts the melodic musical chaos of Terrence Healy’s guitar work and the lyric nature of Adam Carrington’s voice. This is an incredibly dynamic rock song that will grab you by the shirt and won’t let you go until its done. Over The Edge is a big, bruising guitar rocker that sounds like Metallica with Slash sitting in. Run Away is a driving rock song that’s perfectly positioned for Modern Rock and Hard Rock radio formats. It’s the most blandly commercial song on the EP but still a pleasant listen. The Space Within is amazing introspective and reserved in comparison to the first three tracks, and displays some of the range One Step Away possesses.

One Step Away is a rising dynamic force in Boston. It’s easy to see how they could be the next big thing from the Boston scene to rise to national prominence. Time and sales will tell, but One Step Away looks to have a very bright future. One Decision is a great intro.

You can learn more about One Step Away at www.myspace.com/1stepawayband or http://www.onestepawayband.com/, where you can purchase a copy of One Decision.
Posted by Wildy at 5:10 AM