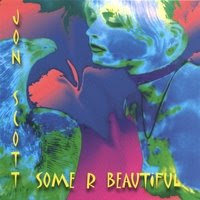 Jon Scott has been creating and performing music all his life, whether with a band, on his own, or in stage productions such as Andrew Lloyd Webber’s Jesus Christ Superstar or South African musical Ipi Tombi. Scott has performed throughout England, Africa and the US. Some R Beautiful was put together with the assistance of producer Gordon Hulbert, whose previous credits include projects by Chaka Khan, Russell Watson, Hugh Masekala, Suzie Quatro, Angie Brown and Heatwave.

Some R Beautiful opens with Suzi Walker, a light pop ballad about unrequited love with a light dance beat. Scott has a breathy voice that floats though the song, sandwiched between the instrumentation and percussion. Scott’s voice isn’t quite strong enough to overcome the arrangement here but holds his own. Summer is an electro/dance hybrid that may have some club potential, particularly as a remix. Everything’s Beautiful is another dance tune that will definitely get your feet moving and may be the most commercial song on the disc. Eyes Like The Sun is a straight up pop tune that is catchy enough to get your attention but middle of the road enough to not hold on to it long term. A Beautiful Country is a neat Bossa Nova tune that almost gets derailed by overly heavy keyboard parts in the introduction. The gem of the album is the tenth track, Guy. Scott saves his most personal songwriting and performance for the end of the album before leaving us with two dance remixes.

Jon Scott has a pleasant voice. It’s not iconic or overpowering but is very listenable and perfect for the light material offered here. One would guess Scott is a Stevie Wonder fan judging by his writing style, as the influence appears obvious. The overall performance on Some R Beautiful is good although a bit low energy at times. Jon Scott will find definite followers in the pop marketplace but is definitely a niche musician marketing wise. The dance material is club worthy and should gain Scott some attention. When Scott really bares his heart (Guy) the performances can be amazing.

You can learn more about Jon Scott at http://www.jonscottmusic.com/. You can purchase a copy of Some R Beautiful at www.cdbaby.com/jonscott.
Posted by Wildy at 6:06 AM