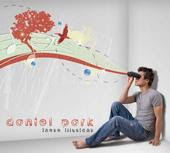 Long known to New Mexico music fans as part of regional favorites Live Bait and Kiss To Betray, Daniel Park has taken his violin and guitar and struck out on his own. Born in South Korea, Park was introduced to music through the violin at the age of seven. The violin has always made Park, the musician, integral to ensembles he’s played with, but there was always a yearning, a need, to break free and take the lead. With his debut album, These Illusions, Daniel Park moves firmly to the forefront in offering up his earliest musical visions in song for all to hear.

Paving the same musical path as artists such as Edwin McCain, Rob Thomas and Jeffrey Gaines, Daniel Park mixes his own sense of balladry with bare-bones rock crooner and intent and a mix of pleasant sounding pop/rock tunes. The end result is eleven songs that generally sound not entirely unlike a number of other artists you might hear on the radio these days. The album opens with What We Should Be, a wonderfully melodic first single. Pleasant, listenable and marketable; What We Should Be should be a successful song for Park without really challenging the listener or the performer. Park gives us an idea of what he’s really made of on Shipwrecked, with frenetic guitar and a wonderfully catchy melody. DTR carries some of the same energy in a catchy, commercial package. It’s another song that could be successful based on sound/style without being overly memorable. These Illusions, on the other hand, find park raising his game again. Park keeps the momentum going into Times Have Changed. The upbeat rocker is one of the high points of the album; both well-written and commercially viable. (My personal favorite is still Shipwrecked). Goodbye is a decent listen, and Beautiful closes out the album on a very bright, let’s get this on a mix-tape moment.

These illusions could not be more apropos. Daniel Park appears to have a significant talent for songwriting. He’s able to deliver a song in a personal and personable fashion that’s strong enough to come across even in the recorded medium of a CD. Park also sounds like he’s trying write for someone other than himself on much of the CD. He’s talented enough as a songwriter to get away with it, but the seams show at times throughout These Illusions. In songs such as Shipwrecked, when park sounds like he’s having fun, or Beautiful, where part is playing and singing from the heart, there is no doubt about the sincerity or “realness” of the musical moment. But much of the album comes across as if Park is still trying to find his voice. In the process he's sounding like a hybrid of himself and some of the acoustic pop icons who have dominated the radio in recent years. He’s neither the first nor last to start out this way, and most song writers over time grow into their own voice (or comfort with it). That’s what we hope for Daniel Park. In the meantime, this is a good start.

You can learn more about Daniel Park at http://www.danielparkmusic.com/ or www.myspace.com/danielparkmusic, where you can order a copy of These Illusions.
Posted by Wildy at 5:00 AM