Review: Leopold And His Fiction - Ain't No Surprise 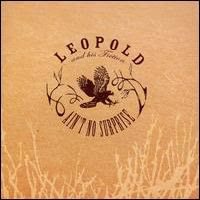 Leopold And His Fiction – Ain’t No Surprise
2008, Native Fiction Records

There is nothing polished about Leopold And His Fiction; nothing refined. Ain’t No Surprise is raw Rock N Roll ripped right from the soul and social consciousness of James, Micayla Grace (bass/vox) and Jon Sortland (drums/vox/organ). Songs like Hawk Eyes and Come Back (Now That I’m Here) underline the raw energy Leopold And His Fiction are capable of, while Broke has an almost Jim Morrison-like aura over it. The best track on the disc is Ain’t No Surprise. James has pieced together lyrics worthy of Bob Dylan and a straight ahead folk/rock arrangement that is infectious and memorable. A close second is Katie Mae, a delicious little bit of rockabilly that you won’t be able to resist. Other highlights include Sun’s Only Promise, Mean Ol’ Train and Pretty Neat.

Leopold And His Fiction don’t fit easily into one demographic or genre slot. If you’re a fan of classic garage rock with a penchant for plains sensibility and a back-roads Americana feel, then Leopold And His Fiction are for you. Quirky and dirty with the dust of thousands of miles of road, Ain’t No Surprise will lull you with its earthy feel and worm its way inside your head. It may take a few listens, but this disc will charm you.

Thank you for the review. Check out videos of; "Broke" and "Ain't No Surprise" shot in Park City TV's studio during the Sundance Film Festival in January 2009.