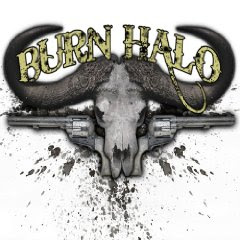 Burn Halo front man James Hart is familiar to many Rock fans from his days heading up 18 Visions. When 18 Visions disbanded, Hart decided to pursue a musical project that encompassed his individual musical vision. Working with songwriter/producer Zac Maloy, Hart penned what would become Burn Halo’s debut. The album, also called Burn Halo, was scheduled to be released in early 2008 by Island Records, who unexplainably changed their minds, so Burn Halo will be released on Hart’s own imprint, Rawkhead Records on March 10, 2009. The recording features support from Daniel Adair (Nickelback), Chris Chaney (Jane’s Addiction) and Neil Tiemann (David Cook), with a special guest appearance by Avenged Sevenfold’s Synyster Gates.

Burn Halo opens with Dirty Little Girl, a rocking wall of sound with more life and hard edge in it than 99% of the stuff you’ll hear on the radio these days. This song might just be too hot for radio. Save Me is a huge guitar filled rocker that sounds like it’s a half step between 18 Visions and Metallica. The verses are heavy enough to please longtime fans and the chorus is commercial enough to break hard in Modern Rock and Metal formats. Here With Me has a little less of the slash and burn style to it, with Hart feeling out his pop sensibilities in very successful fashion. The most impressive thing about Burn Halo is the ability to rock hard but maintain a melodic pop mystique that is next to impossible. The best comparison I can think of goes all the way back to the glory days of Guns N Roses.

Every pop-metal album has a pre-requisite of at least one love ballad or one melancholy song about the one who got away. Too Late To Tell You Now fits in perfectly. This is perfect power ballad material with big guitar on the chorus, great harmonies and a cadence that will stick in listeners’ minds. So Addicted and Dead End Roads And Lost Highways are fairly typical Modern Rock fodder, although both carry Hart’s excellent grasp of pop timing and melody.

Lest you think Burn Halo is going soft, Our House is strong enough to rip it right off the foundations and may be the best overall song on the disc. Falling Faster revisits the prerequisite ballad requirement in one of the better power ballads you’re likely to hear in 2009. Anejo rocks in a frantic, pedantic fashion and has some amazing guitar work. Back To The Start is my favorite part of any hard rock album, when it occurs. A primarily acoustic tune that not only lets the melodic sense of the band shine through but also displays how truly talented the musicians are when all of the effects and distortion are stripped away. Burn Halo closes out with Gasoline, a melodic throwback to the sort of hair-metal anthems that dominated the airwaves in the 1980’s.

Burn Halo knows how to rock. James Hart has a wonderful melodic sense and an ability to craft these amazing pop songs with the hardest of edges. Breaking out from the safety of 18 Visions was a risk, and it was one well taken. Burn Halo looks to establish itself as one of the more talented rock outfits on the market. Burn Halo hits shelves on March 10, 2009. Look for this band, and album, to be everywhere in 2009.

You can learn more about Burn Halo at www.myspace.com/burnhalo. You can pre-order a copy of Burn Halo at Amazon.com.
Posted by Wildy at 5:20 AM

Great review! I know I myself can not wait to get my hands on this album, even more so since I saw Burn Halo play live.
This album is going to be a must have for everyone.
And if you have the chance, definately go see them in person, you will not be dissapointed.