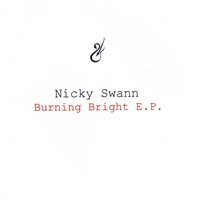 Hailing from Kingsteignton, Devon, England, Nicky Swann has deep roots both in the country and in the brand of acoustic folk music she writes and plays. Long of a successful cover duo, Swann became a songwriter quite by accident. Left without a guitarist and unhappy with potential replacements after her duo dissolved, Swann took it upon herself to broaden her guitar skills from the three chords she knew. In no time at all Swann was back on the circuit and writing her own material. The time since has been full of local awards and recognition, and Swann has begun to set her sights on a larger audience. Nicky Swann recorded and released her debut CD, Burning Bright (EP) in 2008. Without distinct popular flair, Nicky Swann offers up honest, from the heart folk music in the spirit of Lucinda Williams and at time Bonnie Raitt.

Burning Bright opens with Good Advice, an incredibly poignant story song about the daughter of a highwayman who warns her away from his ultimately fatal lifestyle. It’s a Greek tragedy set to music in a melancholy Country/Americana arrangement that is sonically gorgeous. Wheels Keep Turning is a song of hopeful melancholy about second or new chances and the passage of time. One Step Away is a little more upbeat, played in a more traditional Country arrangement. It’s a song about the dynamics of a relationship that is very intelligent and tuneful. This is not your typical Country/Folk fare, but a classic song that would be welcome in Nashville in almost any age of Country music. Time Stands Still is a passionate plea for a relationship not to end. It is one of the most heartfelt and personal performances I’ve heard on CD in some time.

Nicky Swann is a lesson in accidents and fate. If you do what you love and do it well you’ll be given what you love to do. The fact that the latter isn’t always exactly what you might have expected is irrelevant; or maybe it’s the point. Nicky Swann cocooned herself after the breakup of her old due, and emerged from that hibernation as an amazing songwriter. Burning Bright is a thing of beauty; a Wildy’s World Certified Desert Island Disc, and an instant classic.
Rating: 5 Stars (Out of 5)

You can learn more about Nicky Swann at http://www.myspace.com.nickyswann/. You can pick up a copy of Burning Bright (EP) at www.cdbaby.com/cd/nickyswann2.
Posted by Wildy at 5:20 AM