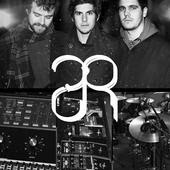 Surrey, England holds hidden Rock N Roll treasure (but not for long). Melodic rock trio Arcane Roots can’t stay hidden under a bushel forever, not with the magical sound heard on their self-titled, 3-song EP. Vocalist/guitarist Andrew Groves has the smooth, melodic vocal sensibilities of Chris Martin and an almost Andy Summers-ish sense of musical construction. Adam Burton (bass) and Daryl Atkins (drums) deliver a rockin’ rhythm section and some serious backing vocals to what may be some of the most gorgeous and aggressive melodic pop/rock heard on either side of the Atlantic.

Opening with Rouen, Arcane Roots sounds like a cross between Coldplay, Led Zeppelin and The Police. The divergent musical strands of heavy, melodic and punk rock is startlingly new sounding and very well done. Groves’ vocals soar over the song like a transcendent phoenix, falling into flames at the end. On the second track, Nylon, Groves cements his position as one of the more unique and memorable voices in Indie Rock. An Easy Smile turns quickly from a garage rocker into an art-rock monster full of melodic grace and fits of musical chaos. Laughing in the face of standard song construction, Arcane Roots piece together musical lines so disparate they have no choice but to work. The result is something on the level of musical genius.

Arcane Roots brings Progressive Rock back into the mainstream, mixed with elements of Punk, Alternative and Melodic Rock. The musicianship here is outstanding – it has to be. A lesser band couldn’t pull off the brave musical choices execised on Arcane Roots. Andrew Groves should be the next vocal superstar out of the UK. Arcane Roots is currently planning tours throughout Europe for the summer of 2009, but it’s only a matter of time before they look out across the Atlantic and see a market that hungers for a band like them. Outstanding.

You can learn more about Arcane Roots at www.myspace.com/arcaneroots or http://www.arcaneroots.com/. It appears that Arcane Roots (EP) is either a demo or only locally available at this time. Bug them through MySpace and perhaps they'll sell you a copy. You won't be sorry.
Posted by Wildy at 5:00 AM