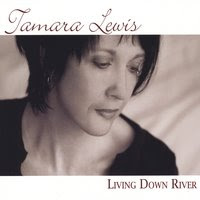 Seattle’s Tamara Lewis is a singer/songwriter whose writing is informed by twenty years as a psychotherapist as well as her own struggle with a decade-long serious illness. Writing primarily in a folk style with country and blues influences, Lewis opens her heart to listeners with no quarter asked. Supported by Max Cohen (Dar Williams), Pat Donohue (Prairie Home Companion), Murl Sanders and a cast of extremely talented musicians, Lewis delivers ten songs of passionate folk on her second CD, Living Down River. You’ll hear hints of influences such as Alison Krauss, Patsy Cline and Nanci Griffith, but Lewis’ distinctive voice and lyrical style will leave a marked impression on listeners from opening note to last.

Living Down River opens with I’ll Come Home, a song about being able to find and stay in your center even when darkness descends on your life. Lewis’ voice is strong and soothing; the perfect complement to the lyrics when you realize that she’s singing as much to herself as to you. Better Day is a country lullaby for a bad day; full of the vulnerability of someone who has lost control of their life, it is one of the most poignant songs you’re likely to come across. There’s a sad yet hopeful beauty here that is magical. Don’t Look At The Mountain is in a southern gospel style that infuses bluegrass instrumentation. It’s an incredibly enjoyable listen.

That Leavin’ Sound is a class country song of heartbreak sung in intelligent and vibrant terms. Tamara Lewis sings this song as if she’s feeling every wrench of her heart. Try not to be moved. Big City Blues goes to the other end of the spectrum. It’s a smart look at city life and is probably the most fun song on the album. With My Eyes is a special moment. It addresses fidelity and attraction in an honest and bare fashion that is refreshing. Cold Coffee, Warm Beer is a humorous look at how to handle running into an ex-boyfriend written in the spirit/style of Christine Lavin. Key Of Lonely is the keynote song on Living Down River; a gorgeous piano-based ballad about a relationship that doesn’t work despite best intentions by both involved. The album closes out with Living Down River, a haunting song full of home style wisdom and haunting harmonica.

The talent of Tamara Lewis is abundantly clear. In songwriting she is able to drop the filters that we live with every day and just stand alone in her songs. Steeped in an honesty that is almost unsettling, Lewis finds human insights in her songs like a prospector looking for gemstones. The listener is enriched in the process, but one gets the impression that is Lewis who is most healed by her search. Living Down River is a sonically gorgeous album that is smart, occasionally witty and just plain good. Spend an hour with Tamara Lewis. You’ll be happy you did, and you’ll go back again.

You can learn more about Tamara Lewis at http://www.tlewismusic.com/ or www.myspace.com/tamaralewis. You can purchase a copy of Living Down River at www.cdbaby.com/cd/tamaralewis2.
Posted by Wildy at 5:20 AM