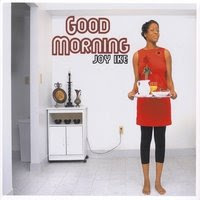 Pittsbugh, Pennsylvania’s Joy Ike is a musical late bloomer. The 25-year-old singer/songwriter just started writing and performing 3 ½ years ago, but is already considered the gem of the Pittsburgh music scene by both insiders and outsiders. The Nigerian born former publicist has acquired a reputation for lyrical depth and social conscience while delivering strong pop arrangements reminiscent of folks like Corinne Bailey Rae, Norah Jones and Fiona Apple. Ike’s second album, Good Morning, was released in 2008 to rave reviews in and around the Pittsburgh area, as well as some on the national scene.

Good Morning opens with a brief vocal intro, a Capella, that displays just what a gorgeous and warm voice Ike possesses. Ike steps out of a reverb chamber into real time like an angel stepping from your dreams into the now. You spend the next twelve songs hoping she won’t leave. Strongman is a piano-driven pop song with hints of soul, like an interesting hybrid of Tori Amos and Alicia Keys. Warriors Get Your Gear On is a wonderful, lyrically dense pop song projecting a somewhat serious perspective on a light and airy pop arrangement. Remember is a gem of a song, sounding like a soliloquy from a Broadway Pop musical. It’s a song about saving the world, or having the courage to try.

Jacob & Esau is a peppy, funk-tinged piano pop tune that sounds like Tori Amos stylistically and is wonderfully vibrant. Unconditional is a song of longing and devotion; certain mix-tape material in a piano-pop format. You’ll want to make time for the melancholy flavor of City Lights and the regretful beauty of Oh I Fight. Other highlights include the hauntingly beautiful and powerful Love Is; Hey, Where Are The Kids; the gospel-tinged The Least Of These and Hope. Hope is very similar in ideals to Rent’s Seasons Of Love, though different in style.

Joy Ike is the real deal; a singer/songwriter with something to say and ample to talent to deliver it. A warm and inviting voice wrapped up in strong and generous piano-driven pop/rock arrangements is the general recipe for Ike, who may be the best thing to come out Western Pennsylvania in a decade or more. Good Morning is an exciting introduction. Nice to meet you, Joy Ike, we hope to hear much more from you.

You can learn more about Joy Ike at www.myspace.com/joyike or http://www.joyike.com/. You can purchase a copy of Good Morning at www.cdbaby.com/cd/joyike2.
Posted by Wildy at 5:20 AM