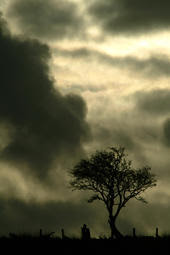 Strange Day are a New York City band who are moving to L.A. but have Midwestern roots. The seeds of Strange Day lay in a band formed at Northwestern University called Evawen that included Lead vocalist/guitarist Fulgencio and drummer Scott Jones. The band split, with Fulgencio moving on to New York. Jones eventually ended up there too and the old band mates reconnected. Bassist Chris Clark came aboard thereafter and Strange Day was well on their way to developing a sound that is heavily influenced by old school metal (Iron Maiden, Black Sabbath) and newer hard rock/metal (Tool, Alice In Chains). Strange Day have added their own groove to the mix to try and create a unique sound. Their debut CD, Face The Change is a mix of dark and light. The music is heavy and full of shadows, and the lyrical outlook is optimistic.

The title track, Face The Change, is a poppy hard rock tune with a funk soul that is unmistakable. This is my personal favorite track on the disc, and it has potential to appeal to metal, modern rock and pop markets. Driven on the strong guitar hook at it's heart and Fulgencio's enigmatic vocals, Face The Change is an instantly memorable song. Coming Of The Sun is an Americana tune and is quite catchy. A Beaten Man has a dirty, curmudgeonly quality to it that is darkly intriguing.

Be sure to check out Flawed and The Sufferin' on your way to the last track, WAR. WAR has an Eric Johnson style guitar solo over a frenetic bass line. You'll be hooked into this tune. Despite the repetitive nature of this song at times the rhythmic qualities are somewhat entrancing, and the imagery is stark and intelligently drawn.

Strange Day is an interesting band. I fully did not enjoy the first three tracks here, and then something happened. It's almost as if Strange Day led with their three weakest tunes (perhaps the ones most designated as "commercial"). With those out of the way Strange Day could return to what they are, a pop/prog/metal band with artistic and perhaps even theatric intentions. This is a great band, although perhaps an acquired taste for some. Even if you don't like what Strange Day does on Face The Change you have to admit it's interesting. A very strong record that deserves to be heard.

You can learn more about Strange Day at www.myspace.com/strangedaynyc. I was not able to find an online site selling Face The Change either via hard copy or download. I would recommend you contact Strange Day through their MySpace page to acquire about availability.
Posted by Wildy at 5:37 AM

I LOVE STRANGE DAY,I HOPE THEY WILL COME TO EUROPE,THEY ARE FAMOUS HERE.I WISH THEM ALL THE BEST.FULGENCIO,YOU ROCK