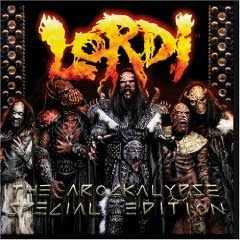 Lordi - The Arockalypse
2006, The End Records

Helsinki, Finland's Lordi has ascended to the upper echelon of heavy rocks in two short years. The 2006 Eurovision Contest winners have owned European rock charts and have even begun to make significant inroads in the Americas. Rock and Roll domination can't be far behind. Leader Mr. Lordi and his compatriots have been featured on a credit card, in books and graphic novels and will even be on display in a motion picture called Deliverance which will release in October, 2008. Today we're going to take a listen to Lordi's debut release, 2006's The Arockalypse, available as both a single CD and a special edition that includes a DVD.

Lordi harkens back to the sort of theatrical rock productions popularized by the likes of KISS, Alice Cooper and Styx. Their sound is pure classic 1980's rock. Lead vocalist Mr. Lordi growls like the meanest modern heavy metal singer, but the songs are amazingly melodic and well constructed. The camp runs high as the band performs in full costume, appearing as the sort of characters that have made Wes Craven a multi-gazillionaire. Lordi can certainly rock hard when they want, but even in their roughest moments there is this supreme musicality that runs through everything they do.

The Arockalypse opens with Bringing Back The Balls, the roughest and toughest tune on the album. The song starts out as a thrash anthem with pounding rhythmic guitars and gravelly vocals, but in the chorus Lordi's musical sense sets in with big triad harmonies. The Deadite Girls Gone Wild is a heavy rock classic. The Kids Who Wanna Play has a big-80's sound to it that would fit in on a bill with a band like Motley Crue.

Probably the best time on the album is Who's Your Daddy?, a tongue in cheek bit of lyrical camp surrounded by big guitars and pounding rhythms with one of biggest top-40 hook laden choruses you're likely to hear. Hard Rock Hallelujah is also a winner, opening with pipe organ devolving into a dark, guitar-heavy crusher. Other highlights include The Chainsaw Buffet, Good To Be Bad, The Night Of The Loving, Would You Love A Monsterman and Evilove.

Lordi stands at the musical crux between Motley Crue's unintentional camp, Styx's art-house rock symphonies and Green Jelly's tongue-in-cheek musical dementia. The Arockalypse is the musical equivalent to a horror movie. There are themes here that you'd never entertain in the light of day, but in a darkened theater the elements of shadow become entertainment. So it is with Lordi. The Arockalypse mixes all that's good about classic rock, heavy metal and musical theater into a stew you'll love to taste.

You can learn more about Lordi at http://www.lordi.fi/. You can purchase a copy of The Arockalypse at Amazon.com or most major music retailers.
Posted by Wildy at 5:00 AM