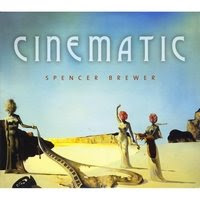 Spencer Brewer is a student, fan, connoisseur and creator of film music. His influences include Bernard Herrmann, John Barry and Ennio Morricone, to name a few. Brewer has had his material used in a couple of movies in addition to television opportunities such as the Barbara Walters show or Oprah. On 2008’s Cinematic, Brewer offers up compositions written for television or movies, as well as compositions written in the same vein.

Cinematic is a collection of compositions for piano and orchestra by Spencer Brewer. Cinematic is split into two discs: The first (Black and White) is a series of compositions played by Brewer on solo piano. Disc two (Technicolor) features many of the same songs (plus a few new ones) arranged for orchestra or small ensemble. Spencer Brewer shows a distinctive style that runs the gamut from James Horner to Randy Newman in compositional tendencies and ingenuity. The optimistic Morning Glory is a sensational piece of writing and benefits distinctly from the small ensemble arrangement on disc two. Blueberry Street is a cabaret jazz/piano bar song with an unforgettable melody. Lupin Swing is an old school piano jazz piece that harkens back to the 1930's and early 1940's.

What becomes abundantly clear is that Spencer Brewer has an ear for the sort of music that helps to drive theater and movies. The epic Cinematic is as close as Brewer comes to a grand theme, but his brand of nuts and bolts composition is much more difficult to master. Grand themes require the ability to find a signature hook or riff and play upon it through repetition, variation and changing of background scenery. Spencer Brewer has an ability to fill in the hue and cry that emboldens a landscape from black and white to Technicolor. Cinematic is a work of art.
Rating: 4.5 Stars (Out of 5)

You can learn more about Spencer Brewer at http://www.spencerbrewer.com/, where you can purchase a copy of Cinematic. You can also pick up a copy at www.cdbaby.com/cd/spencerbrewer.
Posted by Wildy at 6:19 AM